​Perhaps one of the most taken-for-granted elements in the world of visual arts is color. Paintings are comprised almost entirely of it. And even sketch artists vary their shades of gray to provide some dimensionality to each piece.

It’s easy to say we prefer colored art over black and white, especially when they’re presented side-by-side, but when evaluated separately there may or may not be a difference. Furthermore, roughly 8% of men and 0.5% of women have color vision deficiency (CVD) that impairs their ability to see colors.

With this in mind, we tested whether color makes a piece of art more liked by its audience.

We conducted an experiment with 400 people on Amazon Mechanical Turk in which participants were shown a drawing that was either black and white or filled with color, then asked how much they like the artwork.

Granted, this was a small effect of only a quarter of a standard deviation. And there were no interactions with colorblindness, gender, or age, so the effect was quite consistent across different groups of people.
​ 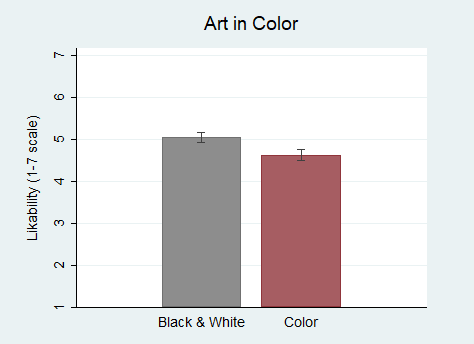 ​A few caveats are in order. First, this effect may depend on the artwork in question. For some pieces, black and white may be more fitting. For others, color may be more appropriate. And then there’s the specific colors used. Some colors may be more appropriate or eye-catching than others. In this case, the researcher took the liberty of colorizing the artwork. Perhaps a different color scheme would have made the piece more liked.

Nevertheless, this experiment certainly revealed an interesting and unexpected result. It will be interesting to see if the result replicates and extends to other artworks. It seems that even the most fundamental elements of the art world are not so easy to predict after all.
​