Is art still "art" when it's sold for profit? 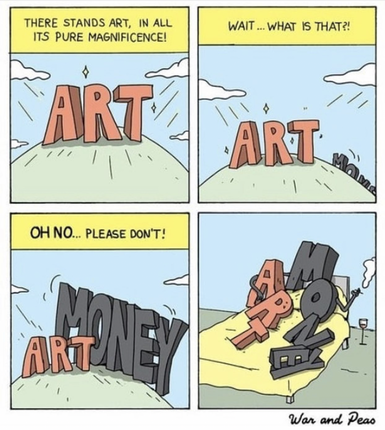 There seems to be a general feeling in the art community that commercialism taints art. Psychologists have actually stumbled upon this effect in other areas. For example, intrinsic motivation (e.g., doing something because you enjoy it) can be crowded out by extrinsic motivation (e.g., getting paid to do it). Edward Deci and Richard Ryan have researched the subject extensively.

Although artists themselves may feel that money taints art, we’re left to wonder how everyday people, the consumers of art, feel. And if commercializing art does make it seem less like art, what’s the psychological mechanism driving that?

One underexplored mechanism could be that commercializing art often means selling several copies of the same work. Mass-producing a piece reduces its rarity, uniqueness, and originality, which are traits valued inside and outside the art world. Thus, we might expect a single painting sold at auction to be considered art more than several copies, even if those copies were produced by the original artist.

To answer these questions, we designed an experiment to test if the commercialization or mass-production of an artistic work causes everyday people to think less of it as “art.”

We conducted a randomized controlled trial with 400 people on Amazon Mechanical Turk in which participants were shown an artistic design called the “Bloom Chair,” a chair that looks like a blooming flower. We randomized two aspects of the Bloom Chair, specifically (a) whether or not it is available for sale with a price tag and (b) whether or not it is mass-produced. This “2x2 factorial design” allows us to test both hypotheses simultaneously, as well as test if both combined yield a stronger result.

Participants were told the following, with randomized conditions in [brackets]:

The image below shows a chair called the “The Bloom Chair,” designed by Kenneth Cobonpue. It is [functional and can be used for sitting / sold online by the company Vertigo Home for $3,430].

[Only one exists / Hundreds exist].”

Participants were then shown a photo of the Bloom Chair with those in the commercial condition shown its $3,430 price tag in the photo under the title.
​
Finally, participants were asked “To what extent do you think [this chair / these chairs] are art? (1 = Not at all, 7 = Definitely)” using a 1-7 scale.

Our statistical analysis revealed that the Bloom Chair was considered to be art less so in the commercial condition (avg. = 5.33) than the non-commercial condition (avg. = 5.69), (p = 0.022). However, there was no significant difference between the unique (avg. = 5.53) and mass-produced conditions (avg. = 5.49), (p = 0.772).
​
​We did find a significant interaction between the commercial and mass-production conditions (p = 0.048), but not in the direction we expected. Whereas the difference between commercial and non-commercial art was stronger when we told participants there was only one unique Bloom Chair (difference = 0.66), this difference was muted when we told them there were several (diff. = 0.05). Still, the Bloom Chair was considered to be “art” the most when the chair was unique and not commercialized.
​ 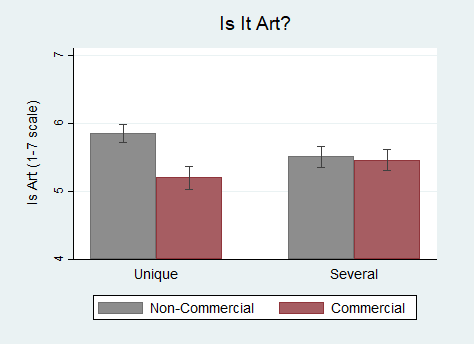 ​So, there you have it. If you’re an artist looking to produce the most authentic art you can, at least authentic in the eyes of your audience, you may want to think twice before commercializing all of your works.

But don’t commit to being a starving artist just yet. The effect here was relatively small. And you may have a different way of determining whether something is truly “art” to you. Afterall, the one thing we know art not to be is “easily defined.”
​
Methods Note