What makes something “art”? This is the question we have been examining in our recent series on the science of art.

Today we’re examining effort. In many fields, putting more effort into something makes it more valuable, even when the ultimate outcome remains the same. Researchers call this the “Effort Heuristic” (a heuristic is a mental shortcut).

Kruger and colleagues (2004) found that humans perceive things like a poem, a suit of armor, and even a painting as more valuable and higher quality when told those objects required more effort to make. This was particularly the case when the quality of the thing in question was ambiguous.

But irrespective of its value or quality, does effort affect the extent to which something is considered “art”? Would a new piece of abstract art receive less praise when it consists of little more than a few flecks of paint thrown blindly at a canvas.

We conducted an experiment with 400 people on Amazon Mechanical Turk in which participants were shown the painting below and told that it either took 15 days to complete and was difficult to make, or that it took 15 minutes to complete and was easy to make (randomly assigned). 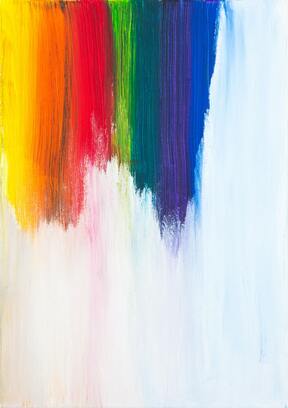 Painting curtesy of Markus Spiske, via Unsplash
Participants were then asked “To what extent do you consider this art? (1 = Not at all, 7 = Definitely art)” using a 1-7 scale.

Surprisingly, the results revealed no significant difference in the extent to which the painting was considered art between our 15-minute low-effort condition (avg. = 5.14) and 15-day high-effort condition (avg. = 5.11), (p = 0.860). Our 95% confidence interval of -0.36 and 0.30 suggests that even if this result was simply due to statistical chance, it’s unlikely any effect would be more than trivial.
​ 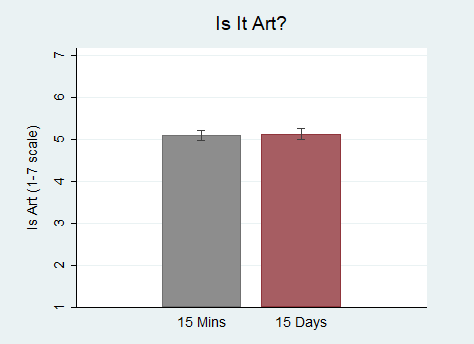 Irrespective of the perceived value or quality of the art, the extent to which a work is considered truly “art” may not be affected by the amount of effort put into it. That’s good news for overworked artists. But as with every research finding, this is merely one brick along the path. Replications and extensions of this non-effect will be just as interesting.
​
Methods Note