Can a simple "thank you" boost spirts?
​Overview

Recent research claims that gratitude can make people happier. Such findings echo an older line of research claiming that simply saying “thank you” to people can improve their mood.

But can expressing gratitude really boost people’s psychological well-being? It’s possible that several minutes of self-reflection might, but we’re unsure about whether a heartfelt “thank you” would be enough to lift someone’s spirits significantly.

It is with hope and a healthy dash of skepticism that we put a simple version of this claim to the test.

We conducted a randomized controlled trial with 400 people on Amazon Mechanical Turk in which half of our participants received a nice thank you message at the end of a survey before rating their current levels of happiness.

Participants first completed a 4-minute set of activities, followed by a concluding survey. Unbeknownst to respondents, half of them were randomly assigned to our neutral condition where we simply told them “This is the last survey question.” The other half were randomly assigned to our thank you condition, where we told participants “Thank you so much for taking this survey!” and on the next line, “We really appreciate the time and effort you put into answering these questions. This is the last survey question.”

Both sets of participants were then asked, "How happy are you right now, at this moment?" and responded by answering on a 1-7 scale (1 = Not at all, 7 = Very much). 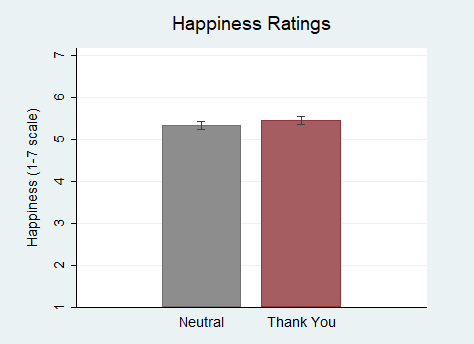 Alas, it seems that a simple thank you may not be sufficient to boost others’ happiness. But this was a simple study, so it’s possible that a slightly more involved thank you could have a slightly larger effect. This study also says nothing about gratitude and one’s own happiness. It’d be interesting to test whether saying thank you makes you happier.

And lastly, it didn’t hurt for us to say thank you in this study. The effect was at least in the positive direction. So we’ll go ahead and keep saying thanks.

Thank you for reading our research!
Methods Note: