We all love food. But not all food is created equally delicious. Many would claim that there’s nothing quite as good as a home-cooked meal. But is that because home cooked food genuinely tastes better? Or is it simply the psychological product of social conditioning, i.e., years of people reinforcing the notion that home-cooked food is better than store-bought?

Although it would take a blind taste test with a random sample of everyday people who cook to truly know whether home-cooked food actually tastes better, we can test whether psychological conditioning has shaped our tastes to favor home-cooking.

We recruited 400 people from Amazon Mechanical Turk to view an image of a pie that we said was either store-bought or homemade (randomly assigned), then asked them to rate how delicious the pie looks.

Participants were told “Imagine you’re going over to a friend’s house for a small gathering, and for dessert your friend has [bought an apple pie from the supermarket / baked a homemade apple pie, made from scratch] (pictured below).” Participants then viewed the following image. 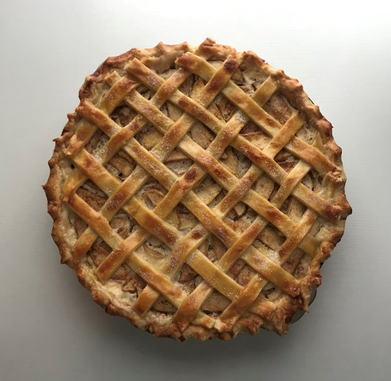 Photo courtesy of Mandy Troyer, via Unsplash
Participants were then asked, “How delicious does this [homemade] pie look? (1 = Not at all, 7 = Extremely)” using a 1-7 scale.

An independent samples t-test revealed a significant difference in perceived deliciousness between our store-bought pie (avg. = 5.41) and homemade pie (avg. = 5.77), (p = 0.007). Participants did indeed perceive the homemade pie to be more delicious than the store-bought, even without having tasted it. The results were unaffected by age (p = 0.405) or gender (p = 0.405). 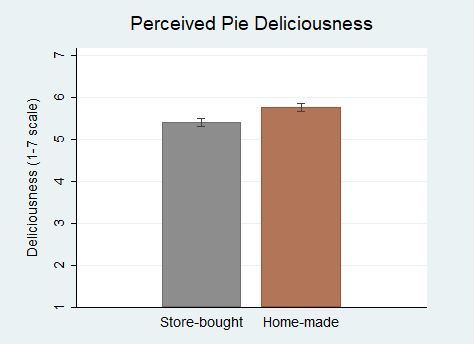 It seems that we are psychologically conditioned to favor the flavor of homemade food. This could be due to social conditioning, i.e., years of family, friends, and pop culture talking about how much better homemade food is than store-bought. But it could also be that homemade food actually tastes better (on average) than store-bought food, and that these past positive experiences have given us our predisposition toward homemade. Either way, it’s an interesting finding.

Oh, and if you plan to do the blind taste test, let us know. We’d love to participate.
Methods Note: