Are we more likely to believe research from high-status universities?
​Overview

Research from academic universities can expand our knowledge and aide societal progress. But good research often requires resources and talent. Does that mean the best research comes from the best universities? Not exactly. Both Ivy League and lesser-known schools have published ground-breaking research. Both have also published mediocre and even downright shoddy research.

Nevertheless, given the selectivity of high-status universities, it’s possible that the public views their research as more believable regardless of its actual quality.

To test whether research from a higher-status university is viewed as more credible than other schools, we conducted an experiment with 400 people on Amazon Mechanical Turk. Participants were provided a summary of a research study and told that it was either from Harvard University or a lesser-known school, Salem State University (randomly assigned). Participants were told the following:
The following claim may or may not be true:

A research study from [Harvard University / Salem State University] suggests that internet search engines reduce our ability to remember information.
Participants were then asked, "How strongly do you believe this research finding is true?" and responded by answering on a 1-7 scale (1 = Not at all, 7 = Very much). 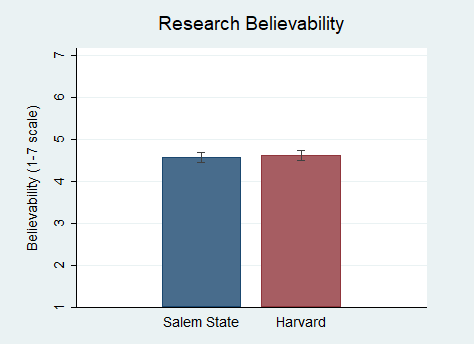 Thus, it seems that everyday people don’t give a credibility bump to ivy league research. Of course, this leaves open the question of whether actual research credibility differs between certain types of schools. With a growing dataset of research study replications, it’s a question we plan to investigate.
Methods Note: