Perceptions of Sophistication toward Mac vs. PC
​Overview

The competition between Apple devices and those of other tech firms has become almost quintessential. If you’ve ever used an Apple product you may understand why. Apple’s elegant product designs have set it apart from competitors for decades.

Indeed, one of the goals of brand marketing is to make the product resonate with your identity, making the product feel like it can be part of who you are. For Apple, perhaps the sleek, elegant design of a product like the MacBook laptop can make a user feel more sophisticated.

This made us wonder whether such sentiments can spill over to others. In this case, can simply using an Apple product make the user himself or herself seem more sophisticated to others, such as friends or coworkers? Perhaps. Then again, maybe they’re just products and people don’t care.

In a previous experiment, we tested whether sending a text from an iPhone vs. Android device (i.e., blue vs. green text messages) affected the sender’s likability. We found no effect there. Perhaps physically seeing the product, complete with Apple’s logo, makes a difference.

We had 400 people on Amazon Mechanical Turk view a brief hypothetical scenario in which they were shown an image of a MacBook or Lenovo laptop, then asked to rate the sophistication of its hypothetical owner.

Participants were instructed to, “Imagine you work in an office and a new co-worker just arrived, sat down at her desk, and took out the [Mac / Lenovo] laptop pictured below.” Participants were then shown one of the two images below, randomly assigned.
Participants were then asked, “How sophisticated does this person seem to you? (1 = Not at all, 7 = Extremely)” using a 1-7 scale.

At the end of the survey, we also asked participants, “Do you regularly use an Apple computer or Apple laptop (e.g., MacBook)?” (answer options were “Yes” or “No”) to test whether the effect might be limited to just Mac users.

Our statistical analysis revealed that Mac users are, in fact, perceived as more sophisticated (avg. = 5.11) than Lenovo users (avg. = 4.79), (p = 0.012). Admittedly, the effect was small, only about a quarter of a standard deviation. And although Mac users rated perceived sophistication slightly higher, we found no significant difference in the effect between Mac users and non-Mac users (p = 0.380), despite our sample consisting of 40% Mac users. 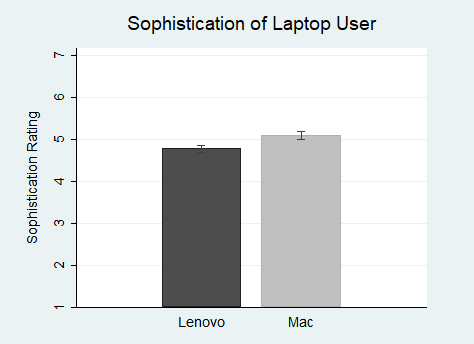 Overall, the results suggest that there is a small boost in sophistication from using an Apple product, in this case a MacBook laptop. This is an interesting divergence from our blue vs. green text message experiment involving iPhone vs. Android. It would be interesting to test how such effects vary for other brands and other types of social perceptions.
​
Methods Note