Whether you’re a fan of robots or have seen the Terminator series one too many times, the fields of robotics and artificial intelligence are advancing rapidly. But for all the research into how robots can be made to be more like humans, there’s far less research into whether humans will like robots.

An interesting context for examining this question is the airport. Not too long ago, airports were staffed entirely by humans. Then, self-check-in kiosks appeared. Although younger customers were a bit more adventurous and soon embraced the new technology, older flyers were not nearly as excited.

We recruited 400 people from Amazon Mechanical Turk to view a hypothetical scenario about checking in for a flight at the airport. Participants were shown an image of either a self-check-in kiosk or one of two robots (randomly assigned), then asked how comfortable they felt about the check-in process.

For the robots, we chose two slightly different designs to test whether the look of the robot affects participants’ comfort levels. We chose Softbank’s “Pepper” and Samsung’s Robo Ray, with Pepper looking shorter due to the angle of the photo.

Participants were instructed as follows: “Imagine you’re at the airport preparing to check in for your flight. Instead of an airport staff member at the check-in counter, you will be checked in by [the computer / the robot] below.”

Participants were then asked, “How comfortable do you feel about this check-in process? (1 = Not at all, 7 = Extremely)” using a 1-7 scale.

We found a very significant difference in participants’ comfortableness with the check-in process between our computer kiosk (avg. = 5.73) and robots (avg. = 4.73), (p < 0.0001). Participants were a whole point less comfortable, on a 1-7 scale, when a robot was facilitating check in than when it was computer kiosk.
​ 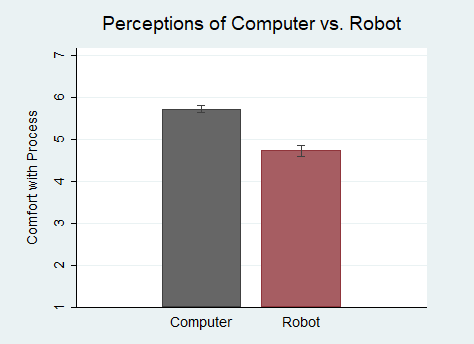 Digging deeper into the robot results, we found that participants were about a half-point more comfortable with Pepper the robot (avg. = 4.98) than Robo Ray (avg. = 4.49), (p = 0.046, sample size = 200). This may have been due to the less intimidating nature of Pepper. Nevertheless, even when we compare the results of just Pepper against the self-check-in computer kiosk, participants were still significantly less comfortable (diff. = -0.75, p < 0.0001). 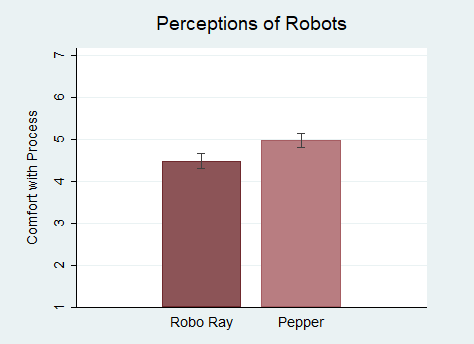 Finally, we found no significant interactions between the results and participants’ age (p = 0.399). This suggests that even younger people might not feel as comfortable with a robot facilitating a process than a traditional computer.

It might take people a bit more time to warm up to the idea of robot workers. But as technology continues to progress and robots’ skills continue to improve, we’ll probably become comfortable with them. At least in time. The question is, how long?
​
Methods Note

We used independent samples t-tests to test for significant differences in perceptions between our experimental conditions. For significant differences, the difference between the two groups' averages would be large and its corresponding “p-value” would be small. If the p-value is less than 0.05, we consider the difference statistically significant, meaning we'd likely find a similar effect if we ran the study again with this population. To test for significant interactions between the main results and participant demographics, we used OLS regression analyses with interaction terms.