Does sacrificing sleep for work affect your likability?
​Overview

We all have those friends who sacrifice sleep to get more work done. Maybe you’re one of them. To some, getting less shut-eye to get more done is a noble sacrifice. To others, it sets an undesirable standard, particularly amongst peers and colleagues. But it’s an open question how others view the sleep sacrificer.

In a previous experiment, we found that a hypothetical co-worker who stays to work later than other employees was liked less by peers. Does that hold true for a friend who isn’t even competing with you at the same company?

We conducted an experiment with 400 people on Amazon Mechanical Turk in which participants were told about a friend who either gets enough sleep or sacrifices sleep for work.

At this moment, how much do you like this person? (1 = Not at all, 7 = Extremely)
​The phrase in brackets was randomly assigned to participants, so they only saw one of these two phrases. The likability question was asked on a 1-7 scale. 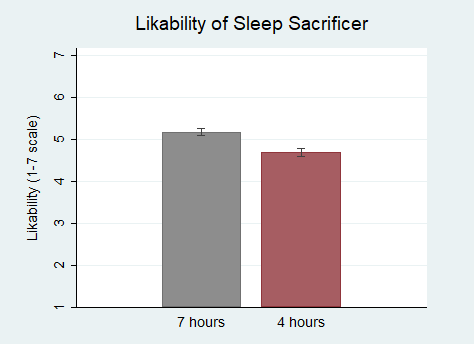 As you can see from the graph below, this age effect was particularly pronounced for Millennials and Gen X—the two generations in the workforce.
​ 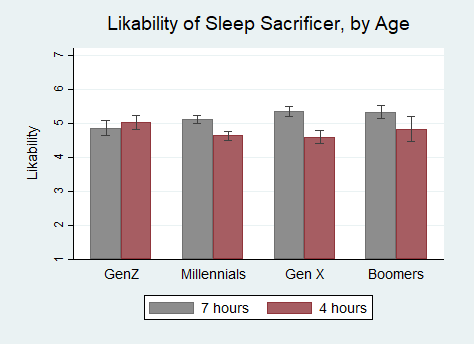 ​If you tend to sacrifice sleep for work, you may not want to complain or brag about it to your friends or colleagues. You may even want to consider getting more sleep, if you can.
​