Perceptions of tipping a rude waiter 5% or 15%
​Overview

If you’ve ever dined out at a restaurant, you know that bad service or a rude waiter sometimes happens. Some believe that poor service merits a smaller tip than the standard 15%. Others believe that everyone has their bad days, and would rather show kindness to workers who are already paid so little.

We were curious, how do others perceive these two different types of people?

We conducted an experiment with 400 people on Amazon Mechanical Turk in which participants read a hypothetical scenario about dining with a friend who, after being served by a rude waiter, decides to give either a 5% or 15% tip (randomly assigned).

Participants were instructed to “Imagine you’re out to dinner with a friend at a restaurant. The food is good, but the waiter has been a bit rude. You get the check, and your friend decides to leave [a normal 15% tip despite the rude waiter / only a 5% tip since the waiter was rude].“ 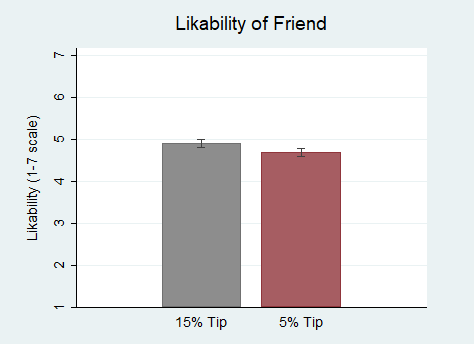 The battle between the merciful and the meritocratic appears to be a stalemate, at least in the arena of tipping perceptions. But much ink has been spilled over the morality of the issue, and about pay fairness in general. If you’re interested, there’s plenty of philosophy out there to chew on. For instance, we also ran an experiment on pay fairness perceptions to test how different ways of allocating pay are seen as more or less fair in the eyes of workers.
Methods Note: