Can the length of a video shift us from interested to annoyed?
​Overview

How many times have we seen a funny video online and thought about sharing it with a friend or coworker? Maybe you’ve been on the receiving end of the video share. At first thought, it seems like such a well-intentioned, good-humored action. But some memes in pop culture poke fun at the practice as annoying.

So we wondered, does video sharing cause psychological pleasure or pain for the recipient? And does the length of the video matter?

We ran an experiment with 400 people on Amazon Mechanical Turk in which participants were told that a friend-coworker wanted to show them a funny photo or video with varying durations in length (randomly assigned). We then measured how interested or annoyed the participant was.

Participants were instructed to, “Imagine it’s almost the end of the workday and a friend/co-worker approaches you wanting to show you a funny [photo / 30-second video / 2-minute video / 5-minute video].” We randomized which of the four conditions participants saw [in brackets]. 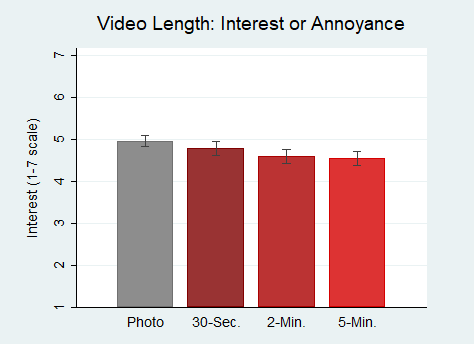 It’s important to note that these effects are only marginally significant, and small at best. We’d want to replicate the experiment before staking the claim that longer videos do reduce interest or increase annoyance. And of course, it likely depends on the video itself. Videos from friends who share your sense of humor are likely to be more interesting and funnier to you, so the anticipatory feelings are likely to be better.

Nevertheless, the results at least suggest that if you’re considering showing your friend or coworker a long video, you should probably make sure they’d really want to see it. Maybe just ask first.
​
Methods Note

We used Ordinary Least Squares (OLS) regression analysis to test for significant differences in perceptions between our experimental conditions. For significant differences, the difference between the groups' averages would be large and their corresponding “p-values” would be small. If the p-value is less than 0.05, we consider the difference statistically significant, meaning we'd likely find a similar effect if we ran the study again with this population. To test for significant interactions between the main results and participant demographics, we used OLS regression analyses with interaction terms.