A test of believability between Wikipedia and the Encyclopedia Britannica
​Overview

Not long ago, Wikipedia was thought to be as credible as your friends' posts on Facebook. Teachers and professors would scoff at any student who dared to cite it. In its infancy, the site was seen as little more than a growing collection of interesting facts by volunteer writers. But with time (and an army of paid and volunteer contributors), the site has grown into a behemoth of information on practically every topic of importance.

Has Wikipedia finally achieved the believability of a real encyclopedia?

We conducted an experiment with 400 people on Amazon Mechanical Turk to test the Believability of a fact from Encyclopedia Britannica vs. Wikipedia. Participants were shown an interesting fact and asked how believable it was. Specifically, we told participants the following:
The following fact may or may not be true:

Nikola Tesla, whose electricity innovations inspired the name of Tesla, Inc., was obsessed with pigeons. He fed and cared for thousands of them, despite being germophobic, and felt particularly fond of one white pigeon.

Source: Encyclopedia Britannica [or Wikipedia]
The source listed at the bottom was randomly assigned as either "Encyclopedia Britannica" or "Wikipedia" (the fact is actually referenced in both). Participants were then asked, "How strongly do you believe this information is true?" (1 = Not at all, 7 = Very much).
​
Results 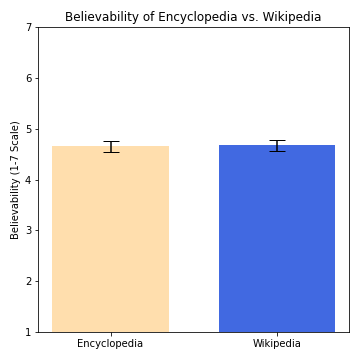