Do political conservatives trust research in the Wall Street Journal or the CDC?
​Overview

One of the major issues facing the CDC throughout the COVID-19 pandemic has been getting people to trust vaccines and scientific research. Much of the skepticism has been concentrated on the conservative side of the political aisle.

Truly addressing the next pandemic will require gaining the trust of the politically conservative populace. But how? Perhaps one way is through more trusted media outlets, particularly those trusted by political conservatives.

To test this hypothesis, we recruited 400 people from Amazon Mechanical Turk to view a media headline about a research finding reported by either the Centers for Disease Control and Prevention (CDC) or the Wall Street Journal (WSJ), randomly assigned. We then asked participants how much they believed the research finding.

We chose the research claim about how Vitamin C may not actually reduce flu symptoms, contrary to many people’s beliefs. We chose this claim because it is still controversial, debated, and research is still being conducted to understand it.

Participants were then asked “To what extent do you believe the [CDC’s / WSJ’s] claim? (1 = Not at all, 7 = Very much)” using a 1-7 scale. At the end of the survey, we asked participants “Generally speaking, do you usually think of yourself as a Republican, a Democrat, an Independent, or something else?” with answer options “Republican,” “Democrat,” “Independent,” “Other,” and “No preference.” We excluded the few observations for other and no preference from our analysis. 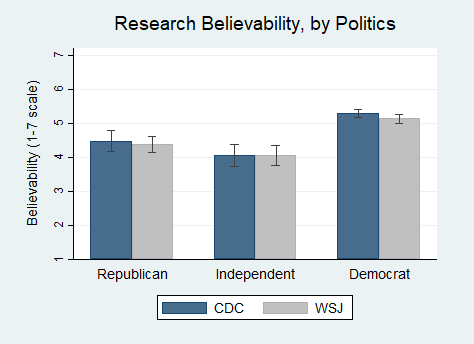 Unfortunately, it looks like reporting research in more conservative media outlets is not enough to persuade skeptics to trust it. But that’s science. Perhaps other media outlets like Fox News or other sources like one’s family or close friends would have better luck convincing holdouts. It would also be interesting to examine how empathy impacts this process.
Methods Note:

We used ordinary least squares (OLS) regression analysis to test for significant differences in believability between the CDC and WSJ conditions, For significant differences, the coefficient would be large and its corresponding “p-value” would be small. If the p-value is less than 0.05, we consider the difference statistically significant. We also used OLS regression analysis to test for interactions, i.e., whether the main result differs between political parties.