Do you know your zodiac sign? Or are you a typical Taurus? Nearly a quarter to a third of Americans believe in astrology. So regardless of one’s personal (dis)beliefs, you’re likely to know a handful of them.

But for all the celestial information astrologists use to understand others, we know less about how believers in astrology are perceived by others. Do people judge like a Virgo? Or are they tolerant as a Pisces? It might depend on gender. According to research by Pew (2017), women are 80-90% more likely to believe in astrology than men. So, do men hold less favorable perceptions of astrology believers than women?

We recruited 400 people from Amazon Mechanical Turk to read a hypothetical scenario about a conversation with a new friend, who either asks where you were born or what’s your zodiac sign (randomly assigned). We then asked participants how much they liked this person.

Participants were instructed as follows: “Imagine you’re meeting a friend of a friend for the first time and you both start a conversation. After talking a bit about your backgrounds, she asks [where you were born / what’s your zodiac sign].”

Participants were then asked, “So far, how much do you like this person? (1 = Not at all, 7 = Very much)” using a 1-7 scale. At the end of our survey we also asked participants their gender and “Do you believe in astrology (zodiac signs)?” with answer options Yes, No, and Not sure; participants who selected “Not sure” were excluded from the zodiac-belief-interaction analysis.

One note: we did accidentally make a typo in the likability survey question for the where-were-you-born participants; the word “this” was unintentionally omitted. This is unlikely to affect the results. 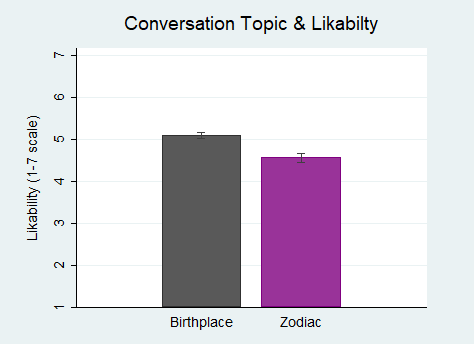 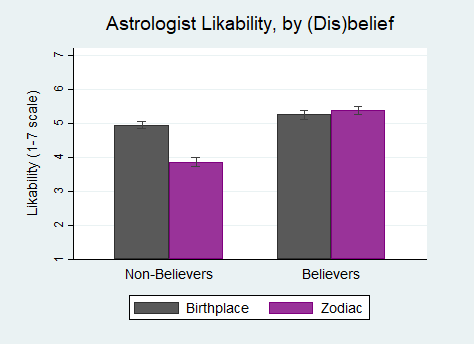 The results suggest that if you’re an astrology believer inclined to discussing it with others, you may want to check if the other person is also a believer beforehand. Among established friends it might not matter as much. But if you’re thinking of conversation topics for new friends or dates, you may want to steer clear of the celestial.
​
Methods Note