Do win-lose views of society vary by political party?
​Overview

Is society just a win-lose, “zero-sum” game? It’s easy to think so when it comes to politics. The U.S. political system has a reputation for being winner-take-all (Gehl & Porter, 2020). Two political parties, Democrats and Republicans, predominate the landscape. And whichever party controls the majority of elected officials generally controls much of the government.

The presidency of Donald Trump is a particularly interesting case study of zero-sum concerns, from both the left and the right. Democrats argue that President Trump’s thinking is particularly zero-sum (Matthews, 2017), whereas many Republicans retort that their reason for electing him was to prevail over an increasingly zero-sum way of life (Hochschild, 2016).

We know that both parties turn up the zero-sum rhetoric when it benefits them (Davidai & Ongis, 2019). But is one side thinking more zero-sum than the other? Do Trump supporters hold a more zero-sum view of society? And is Trump a trigger for these zero-sum perceptions? These are the questions we set out to answer in this series of studies.

We had 400 people from Amazon Mechanical Turk participate in a survey experiment on June 2, 2020. The survey measured participants zero-sum beliefs about society, their political party affiliation, support for President Trump, and zero-sum perceptions of a political action that was experimentally randomized as President Trump’s or the Federal Reserve’s. All survey items were measured on a 1-7 scale.

​To measure participants' zero-sum beliefs, we used the zero-sum beliefs scale (Różycka-Tran & Wojciszke, 2015), asking respondents to rate their level of agreement or disagreement with statements like “Life is so devised that when somebody gains, others have to lose” and “If someone gets richer, it means that somebody else gets poorer” (1-7 scale).

The Trump experiment consisted of the following scenario [control condition in brackets]:

“President Donald Trump [The Federal Reserve] is trying to keep interest rates as low as possible to encourage spending. Based on this information, to what extent do you agree or disagree with the following statements?” 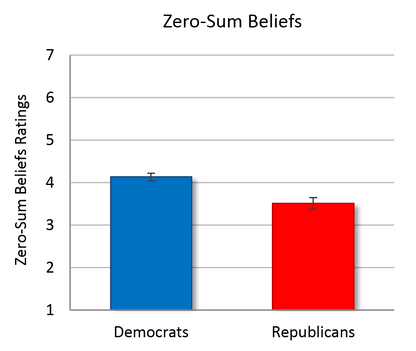 Holding constant age and gender does not significantly affect the results, nor does interacting political party with age or gender. This is in spite of finding a significant negative relationship between age and Democrat affiliation, and a significant negative relationship between age and zero-sum beliefs. Democrat respondent were on average 4.04 years younger than Republicans (p = 0.004) and for each additional year of age we find an average decrease of -0.029 in zero-sum beliefs (p < 0.001).

Interestingly, Trump supporters viewed society as slightly less zero-sum. For each 1-point increase on the 1-7 scale of Support for Trump, zero-sum beliefs about society decreased by 0.12 (p < 0.001). 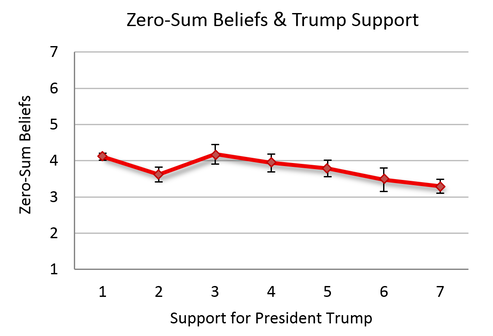 But does labelling a political activity as President Trump’s relative to a more politically independent body like the Federal Reserve increase zero-sum perceptions toward a situation like interest rates? The effect is small, but our experiment suggests the answer is yes. In spite of finding that Republicans and Trump supporters in our sample tend to hold slightly lower zero-sum beliefs about society in general, mentioning President Trump increased zero-sum perceptions toward the situation by 0.33 on a 7-point scale (p = 0.035). Again, this is a small effect size. It’s slightly stronger for Democrats than Republicans, but interaction results were not statistically significant. Nor were any interactions with age or gender. 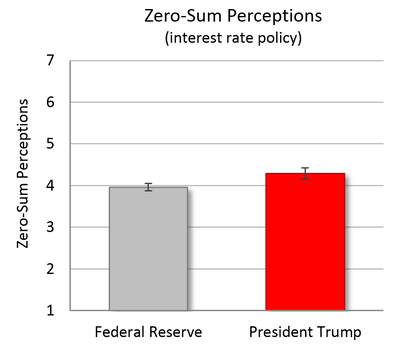 Last but not least, did labeling the policy decision as Trump’s vs. the Fed’s influence respondent’s agreement with the policy? It did, twice as much as zero-sum perceptions. Framing the interest rate decision as Trump’s reduced agreement with the policy by -0.63 points (p = 0.001). But it’d be misleading to stop there. Two-thirds of our sample was Democrats. Here’s the real story… despite the policy remaining constant, simply framing the policy as “Trump’s” triggered partisan thinking. Republicans agreed significantly more with the decision, whereas Democrats agreed significantly less. The effect was similar when the interaction variable was Support for Trump instead of political party.

Our research supports the idea that partisan politics does play a role in zero-sum thinking. Democrats currently hold higher zero-sum beliefs about society than Republicans and Trump supporters, but it's an open question whether this is a long-standing phenomenon or just a product of the current times (i.e., a Republican president). Nevertheless, neither party appears able to look past partisan lines and agree or disagree with a policy based purely on the merits.

Hochschild, A. R. (2016). Strangers in their own land: Anger and mourning on the American right. The New Press.

We used ordinary least squares regression analyses to test for significant differences in zero-sum thinking between Democrats, Republicans, Trump supporters, and viewers of the Trump vs. Federal Reserve experiment. For significant differences, the coefficient would be large and its corresponding “p-value” would be small. If the p-value is less than 0.05, we consider the difference statistically significant. To test whether differences for specific groups differ significantly from their counterparts (e.g., older vs. younger respondents) we used OLS regression analyses with interaction terms. For analyses involving Republicans and Democrat we exclude 12 observations who selected “Other” or “No Preference” for their political affiliation.

The survey materials and data for this study are available on our page on the Open Science Framework.
​