People enjoy playing games. They have for centuries. Board games, cards, dice, and conversational competitions have been and still are a major part of our recreational repertoire. But games have received an upgrade in recent decades. The dawn of the digital world has spawned a host of electronic games, such as arcade games, console video games, computer (PC) games, and mobile games, all of which have upped the ante in terms of how we spend our free time.

But this new genre of games elicits an interesting question. Do people actually enjoy electronic gaming over traditional table games? Since the release of Pong in 1972, electronic gaming has created its own multi-billion dollar market (Webb, 2019). But many still hold the view that electronic gaming is a waste of time. In fact, a majority (59%) of respondents to a Pew Research poll indicated so for some or most video games (Duggan, 2015). Perhaps these diverging viewpoints and differences in video game enjoyment can be explained by gender or generational differences.

Although we can’t settle the score on this debate, we can at least advance it to the next level with a research study.

Game Enjoyment was our variable of interest, specifically “To what extent do you enjoy playing the following types of games? (1 = Not at all, 7 = Very Much).” The following types of games were listed, with the first four aggregated for our variable “Table Games” and the latter four “Video Games”:
We analyzed each of the eight specific types of games, as well as their aggregated groupings (i.e., table games vs. video games) by comparing their means (averages) via ordinary least squares regression.

Results
​
We have a winner! In our sample, people seemed to enjoy video games more than table games, with average ratings of 4.68 vs. 3.96 and a significant difference of 0.721 on a 1-7 scale (p < 0.001). But interesting differences surfaced between age groups and genders, particularly for specific types of games. 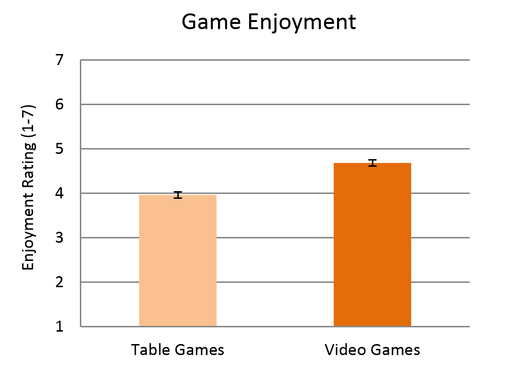 The chart below summarizes the ratings for each specific type of game. People tend to enjoy console video games and PC games most, whereas dice games and conversation games are enjoyed the least. 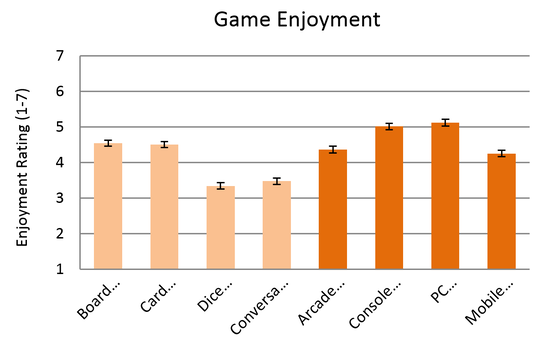 Perhaps unsurprisingly, age and gender also affect the enjoyability of certain types of games. Video games are most enjoyed by the younger generations and men. For each additional year of age, a respondent’s enjoyment of video games decreased, on average, by 0.036 points on a 1-7 scale (p < 0.001). For example, we’d expect a 20-year old respondent to rate their enjoyment of video games as 5.30, but a 60 year-old respondent to rate their enjoyment as 3.88. 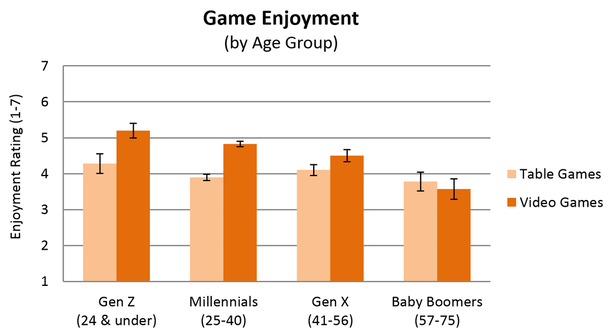 We also found a significant difference in gender. For men, there was a 0.41 higher rated enjoyment of video games than women (p = 0.004).
​ 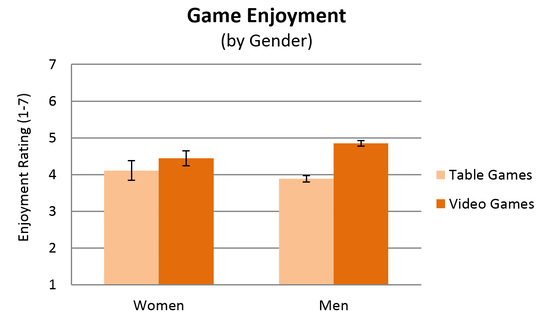 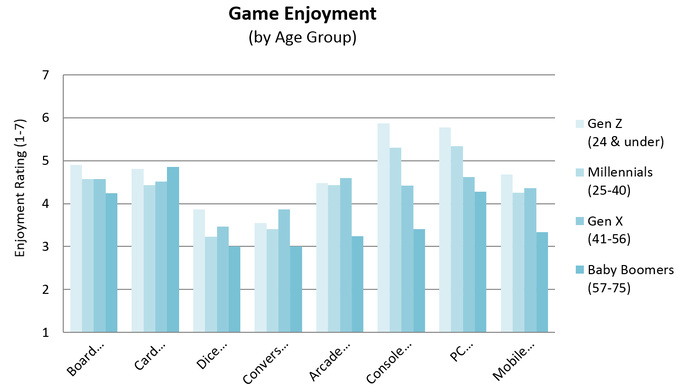 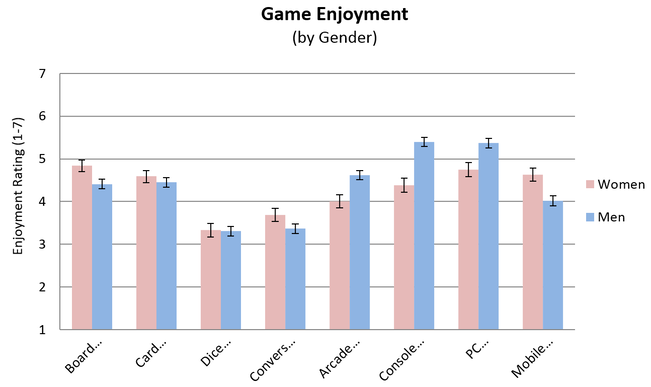 The results of our survey suggest that video games are enjoyed more than table games, and that gender and age play a significant role in these differences. Men and younger people tend to like video games more. But whichever type of game you like, there are plenty out there to enjoy.

Webb, Kevin. “The $120 billion gaming industry is going through more change than it ever has before, and everyone is trying to cash in.” Business Insider. October 1, 2019. https://www.businessinsider.com/video-game-industry-120-billion-future-innovation-2019-9

The survey materials and data for this study are available on our page on the Open Science Framework.​