Do Cancer Researchers get a Likability Boost?
​Overview

In 2019 we asked 1,000 people what research topics they would like to see more of. In the top 5 was the topic of cancer, a disease all too common but no less awful. Despite progress in fighting cancer, more research is needed to better understand its causes and cures.

Although our lab is not equipped to directly research cancer, we can at least study how others perceive those noble souls researching it. We hypothesize that cancer researchers get a likability bump as a result of the important work they're doing.

We conducted an experiment with 400 people on Amazon Mechanical Turk in which participants were asked to imagine they were socializing with a new acquaintance who enjoys running and works as either a Public Health Researcher or a Cancer Researcher (randomly assigned). Participants were asked, "How much do you like this person so far?" and responded by answering on a 1-7 scale.
​Results

We found a very significant difference in Likability of 0.40 on a 1-7 scale between the Public Health Researcher condition (avg. = 5.18) and the Cancer Researcher condition (avg. = 5.58), a difference of 7.8% (p < 0.001). Although this effect seems rather small, it is likely due to the recently increased importance of public health research into COVID-19. We'd expect the difference to be even larger relative to non-health professions. In summary, the results suggest that there is, in fact, a positive likability bump for cancer researchers. 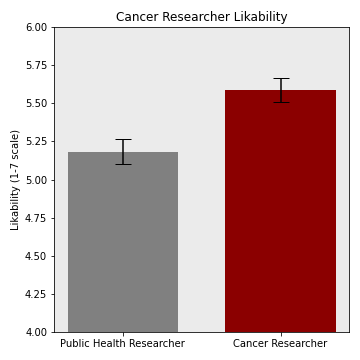