Think about a piece of art. You might be thinking of the Mona Lisa or some other classic painting hanging in a museum. But there’s more to art than the classics. Artistic styles have changed considerably and more rapidly over the past 150 years. It may be hard to believe, but the Cubism of Picasso and the street art of Banksy appeared less than 100 years apart.

Classics like the Mona Lisa are enduringly popular. But to everyday people, are such classics more well-liked than modern art? We put it to the test.

We conducted an experiment with 400 people on Amazon Mechanical Turk. Participants were instructed to look at one of two sets of paintings (randomly assigned), with each set containing three popular paintings of either classic or modern art, as follows: 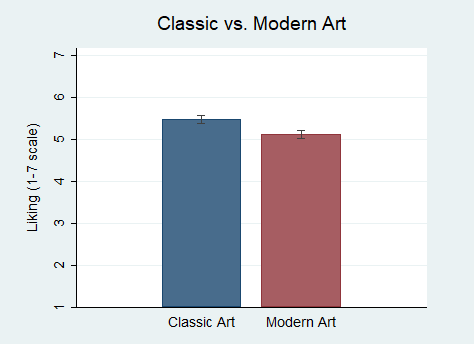 Viewers do seem to have a slight preference for the classics over modern styles of art. Nevertheless, fanfare is likely to differ for specific works of art. It’d be interesting to run a battery of tests using individual artworks. Interesting patterns might emerge.
​
Methods Note

We used an independent samples t-test to test for significant differences in liking between the classic art and modern art conditions. For significant differences, the difference between the two groups' averages would be large and its corresponding “p-value” would be small. If the p-value is less than 0.05, we consider the difference statistically significant, meaning we'd likely find a similar effect if we ran the study again with this population. To test whether differences for specific groups differ significantly from their counterparts (e.g., men vs. women) we used OLS regression analyses with interaction terms.