Is corporate research as believable as research from university?
​Overview

Research is typically thought to be the domain of universities. Indeed, colleges and universities produce the lion’s share of academic research. But for-profit companies also produce research, albeit more focused on practical implications.

Both domains of research have come under fire in recent years. For-profit corporations have faced accusations of conflicts of interest, such as studies on the health effects of sugar that were run by food and beverage companies (Kearns, et. al., 2016). Academics have faced criticism from over half of their studies in “top-tier” publications failing to replicate (Science, 2015), possibly due to their own conflicts of interest, such as publications being tied to tenure and high-status schools and positions.

So which is viewed as more credible, research from universities or corporations? Let’s put it to the test.

We conducted an experiment with 400 people on Amazon Mechanical Turk in which participants were told about a research finding, but randomly assigned to whether the source was a university or a corporation, specifically the University of Minnesota or 3M Company. Participants read the text below:
The following claim may or may not be true:

A research study from [the University of Minnesota / 3M Company] suggests that mindfulness meditation can reduce work stress.
Participants were then asked, "How strongly do you believe this research finding is true?" and responded by answering on a 1-7 scale (1 = Not at all, 7 = Very much). 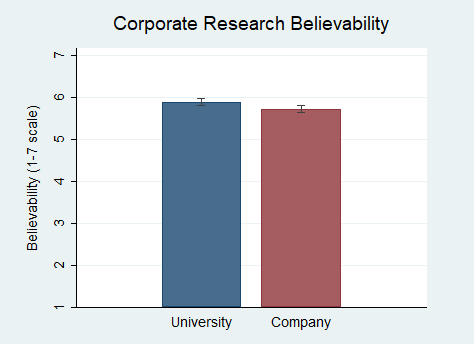 ​One might expect that political beliefs could influence the believability of university vs. corporate research, perhaps with more conservative-leaning (i.e., pro-business) participants believing the company research more. But we found no such effect (p = 0.193).

It seems that whether a research study is published by a university or a company, the believability of that research might be similar in the eyes of readers. Now if we could just fix those pesky conflicts of interest.