Are competitive or team games more fun? Does winning or losing matter?
​​Overview

Games have served as a source of entertainment for ages. But games differ widely in their design, objectives, rules, and other aspects, as does the extent to which people enjoy them.

One fundamental but often taken-for-granted aspect of games is whether they require competition or cooperation. Many games that easily come to mind are competitive, for example, most board games like chess and sports like football. But even sports have teams, and those teams must cooperate to win. There are also games that are purely cooperative, for example, escape rooms.

To test this hypothesis, we recruited 400 people from Amazon Mechanical Turk to play a simplified game, “guess the number.” The objective of the game is to guess the same number that another person picked.

For the experiment, we randomized whether this other person (who was actually a computer algorithm) was framed as a “competitor” or a “teammate,” and whether the game was framed as a game of “competition” or “cooperation” (randomly assigned). To test whether winning or losing the game affected the results, we also randomly assigned whether each participant won or lost the game (i.e., chose the right or wrong number).

Participants were instructed as follows:
This activity is a simple game of [competition / cooperation].

On the next screen, to test if our results differ depending on whether the participant wins or loses, we informed them of whether they won or lost (randomly assigned) using the wording below:

Win Condition:
“Congrats! You guessed correctly.
You [both] win.”

Lose Condition:
"Sorry! You guessed incorrectly.
[Your opponent wins / You both did not win]."

We then asked participants “To what extent would you want to play this game again in the future?” (1 = Not at all, 7 = Very much).

First, we tested our two main effects, namely, whether the game was framed as competitive or cooperative, and whether participants won or lost. An independent samples t-test showed no significant difference in how fun our game was when it was framed competitively (avg. = 4.32) vs. cooperatively (avg. = 4.20), (p = 0.544). Nor was there a difference in how much participants wanted to play the game again (diff. = 0.11, p = 0.595). 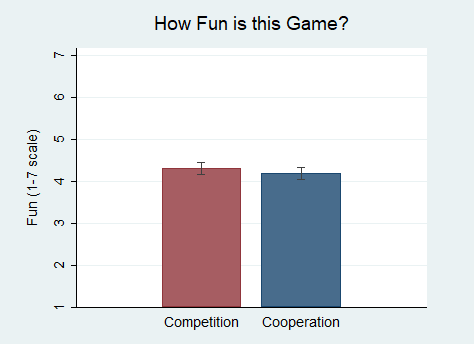 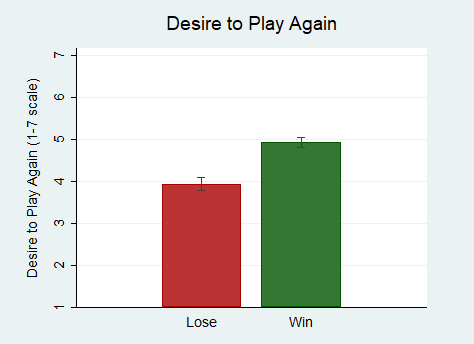 The results did not vary interactively, however. The difference in wanting to play again between the Win and Lose condition was unaffected by whether the game was framed as competitive or cooperative (p = 0.664).

Overall, the results suggest that cooperative games may be as fun as competitive games and vice versa. However, different games may be more or less fun competitively or cooperatively when other factors are varied, such as game design, complexity, or mode of play (e.g., console videogames, PC games, etc.). Future research in this area would be interesting.

Whether the game is competitive or cooperative, one thing is for sure. Most of us want to win.
​
Methods Note

We used an independent samples t-test to test for significant differences in perceptions between experimental conditions. For significant differences, the difference between the two groups' averages would be large and its corresponding “p-value” would be small. If the p-value is less than 0.05, we consider the difference statistically significant, meaning we'd likely find a similar effect if we ran the study again with this population. To test for significant interactions between the competition-cooperation and win-lose conditions, we used OLS regression analyses with interaction terms.