Do exclamation marks in work emails affect your likability?
​Overview

Should you use exclamation marks in work emails? Many people do it, but its appropriateness is debated. Some say that using exclamation marks demonstrates emotional intelligence, allowing us to express emotions in typically bland written mediums; critics say it just makes you look emotional (Fernandez, 2018).

Regardless of how it makes us look, we’ve been using exclamation marks with increasing frequency (Beck, 2018). Professor Deborah Tannen at Georgetown University compares this form of “linguistic inflation” to words like “awesome”—once used sparingly, but now so cavalier it’s often merely a sign of approval. But how does this play out in the workplace?

Most of us want our co-workers to like us. But a lot of things go into perceptions of likability. In particular, colleagues perceptions of our “warmth” and “competence” (or how nice and smart they think we are) can affect our likability, as well as our mental well-being and workplace outcomes (Festinger, 1954; Fiske, et al., 2002). If using exclamation mark makes us seem more emotional, might it cause co-workers to view us as warmer, but less competent?

Adding to this debate is the role that gender or age may play. Prior research has found that women use exclamation marks more frequently than men in professional forums, but more in the spirit of friendly interaction than “excitability” (Waseleski, 2006). Younger people also seem to use exclamation marks more, in addition to non-text symbols like emoticons or "emojis." The existence of such relationships begets the question, might exclamation marks be perceived differently when the email sender (or recipient) is a man or a women, or younger or older?

We had 400 people from Amazon’s MTurk read an email from a hypothetical colleague that either contained 3 exclamation marks or just periods and commas (randomly assigned), and was either sent by a male or female colleague (randomly assigned). Participants wrote a brief reply to this email, then took a psychology survey measuring their perceptions of the sender’s likability, warmth, and competence, along with survey questions measuring their gender and age. The email that participants read was as follows, with opposing conditions in brackets:
From: Jon [Jen] Wilson
Sent: Tuesday, April 16, 2019, 2:12 PM
To: company@listserve.com
Subject: Website

In two weeks we will begin creating a new company website. This is your chance to share any ideas you may have. [!] If you have any ideas let me know.

Gender had no effect, as Figure 2 shows for likability. There were no significant differences for perceived warmth, competence, or likability when our email sender's gender was male (Jon) or female (Jen), nor did gender affect exclamation perceptions. 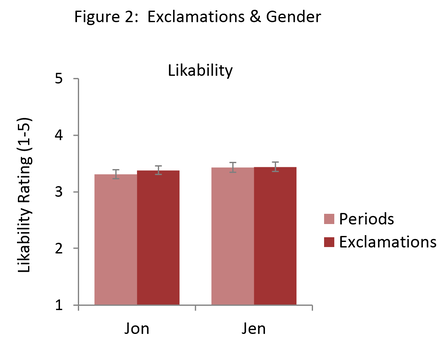 However, our exploratory analysis of age revealed an interesting result that merits further research. Gen Z participants aged 25 or less liked the email senders that used exclamation marks 22% more than senders who just used commas and periods (p = 0.002; d = 0.85; a difference of 0.66 on a 1-5 scale). This is a large effect size, as seen in Figure 3. They also viewed the sender as more warm and competent, though those effects are about 25% smaller.

An important caveat is that our sample size of Gen Z participants is only 57 people. We do find the results hold moderately well when we adjust the age brackets for what counts as “Gen Z,” but further tests are needed to confirm the effect and its size. Nevertheless, it may make sense that younger people raised in an era of emojis and other forms of digital emotion expression would prefer more than just periods and commas 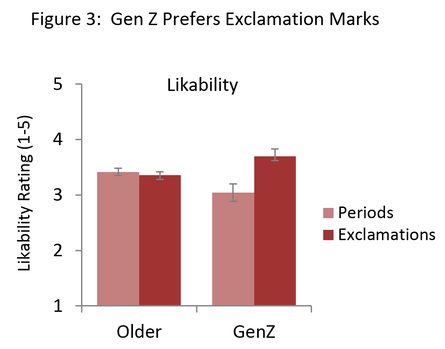 Beck, Julie. “Read this Article!!! How many exclamation points do you need to seem genuinely enthusiastic?” The Atlantic. June 27, 2018. https://www.theatlantic.com/technology/archive/2018/06/exclamation-point-inflation/563774/

To test for significant differences in Liking and other variables between each condition, two-sample t-tests were used. For significant differences, the T-statistic would be large and its corresponding “p-value” would be small. If the p-value is less than 0.05, we consider the difference statistically significant. We then measure the size of those differences using a statistic called “Cohen’s d” which is a standardized effect size that makes the differences more comparable across groups (d = 0.20 is small, 0.50 is medium, and 0.80+ is large). To test whether differences for specific groups (e.g., women, Gen Z) differ significantly from their counterparts (e.g., men, older generations) we used OLS regressions with interaction terms.

For more details about this study, including the pre-registration, survey materials, and data, check out our page on the Open Science Framework.