Did Meta's name change shield it from negative press?
​Overview

On October 28, 2021, the company formerly known as Facebook announced that it was changing its name to Meta. Many argued that this was simply a strategic move to shield itself from bad press over misinformation, offensive speech, and health issues stemming from use of its platform, particularly for minors. But Facebook’s CEO, Mark Zuckerberg, defended the move as one it had intended to make anyway, a change in focus to the “metaverse” or online virtual reality.

The company’s name change and alleged pivot during such a heated time of crisis raises the question of whether it actually helped stop the bleeding. Does the image of a company like Facebook improve when it simply changes its name?

We conducted an experiment with 400 people on Amazon Mechanical Turk on November 19, 2021 in which participants were provided some information about the company, named either “Facebook, Inc.” or Meta Platforms, Inc.” then asked how much they liked the company.

Participants were told, “Below is a profile of a company. Please read the information and answer the question that follows.” Participants then saw one of the two company profiles with their logos and summary info, as depicted below. Note that for Facebook the social media-related items were listed first in the bulleted list, whereas for Meta, “the metaverse” focus item and “Oculus” subsidiary were listed first.

We found no significant difference in likability between Facebook (avg. = 3.74) and Meta (avg. = 3.66), (p = 0.729). We did notice that the standard deviations for likability were quite high in both groups, suggesting that some people love Facebook/Meta while others hate it. The standard deviations for each group were 2.08 and 2.05, respectively. However, we didn’t find any interactions between these results and participants’ gender (p = 0.900), age (p = 0.464), or political beliefs (p = 0.263). 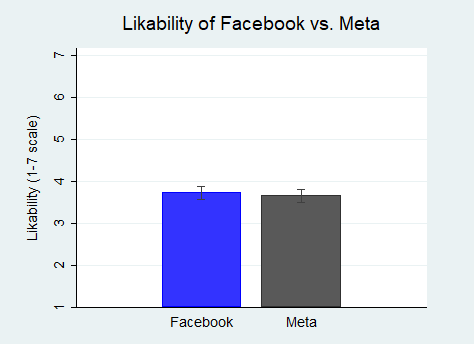 What’s in a name? In this case not much. Facebook’s renaming to Meta has done little to boost its image among the general public, at least 3 weeks after. But who knows how this will play out in the months and years ahead. It’d be interesting to see if these results change.
​