A psychology experiment with a painting and graffiti
Writing on toilet walls is neither done for critical acclaim nor financial gain; therefore, it is the purest form of art.
~ Anonymous (on a toilet wall)
​Overview

Is graffiti art? Or just an eyesore? It probably depends on a number of factors. For example, haphazard streaks of spray paint to a storefront is typically unsightly and certainly illegal. But what about the street art of Banksy? Technically, it is also illegal. And yet, the imagery is often so poignantly relevant that it has resonated with people around the world. We’d be remiss not to consider that art.

But for more common forms of graffiti, e.g., big bubble letters we have no way of deciphering, there is often less meaning for everyday people to interpret. Instead, we are just left with violations of social norms and laws. Perhaps these violations make us less apt to perceive such graffiti as art, relative to if it were in a different medium within the bounds of artistic norms and laws, like a painting canvas.

We recruited 400 people from Amazon Mechanical Turk to view an image of graffiti that was either on a wall or in a painting frame (randomly assigned), then asked them the extent to which they considered it art.

Image courtesy of billow926 via Unsplash
Participants were then asked “To what extent do you think this [painting / graffiti] is art? (1 = Not at all, 7 = Definitely art)” using a 1-7 scale.

An independent samples t-test revealed that participants were less likely to consider the graffiti as art (avg. = 4.90) than the same image framed as a painting (avg. = 5.25), (p = 0.037). It was a small difference, about a fifth of a standard deviation, but nonetheless statistically significant. The results weren’t affected by participants’ gender or age.
​ 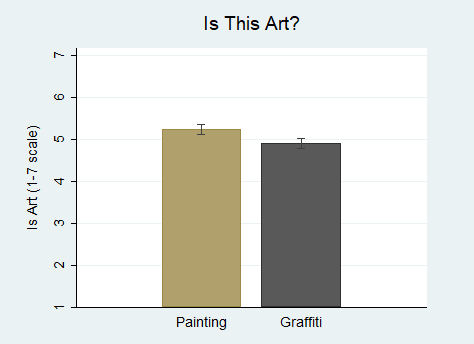 There was, however, a statistically significant interaction with political beliefs. It seems that people with more conservative political views (i.e., Republicans) are much less likely to not consider graffiti as art, whereas people who lean more liberal (i.e., Democrats) tend to accept graffiti as more on-par with traditional art mediums like paintings. The difference between our two images was negligible for Democrats (diff = 0.15), but the difference for Independents was 0.57 and for Republicans 1.03, on a 1-7 scale (p = 0.029).
​​ 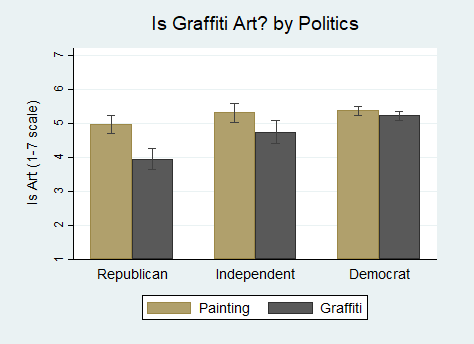 ​Admittedly, we didn’t anticipate this political interaction, so it should be replicated before relying on it. But it makes sense when considering that those with more conservative political beliefs tend to hold laws in higher regard, and hence might devalue an illegal artistic medium like graffiti.

The results suggest that people do in fact view graffiti as less of a legitimate “art” than something like a painting. However, it seems that the results might be driven by more conservative onlookers. So if you’re an aspiring street artist in a conservative city, you should consider using a canvas instead of a wall. Not only does it tend to be more legitimate legally, it also seems to be considered more legitimate artistically.
​
Methods Note