Meeting in the Metaverse

Perceptions of meeting via Zoom vs. the Metaverse
​Overview

In October 2021, the company formerly known as Facebook changed its name to Meta. To some, this move was merely a PR front meant to deflect the heat over the negative effects of Facebook’s platforms recently brought to light. But company insiders maintained that it signified its strategic shift to a focus on the “metaverse,” an online virtual reality space that the company wants to use to bring people together.

Motives aside, the metaverse has been getting more attention. In the month immediately following Facebook’s (Meta’s) announcement, Google searches for “metaverse” increased by 10-20 times its usual search traffic. But are people excited by the metaverse? Or are they dreading it?

The idea of “bringing people together” via an online virtual reality space may sound like Zoom on steroids to some. For others, it might be an exciting new frontier. Although the actual metaverse might not be ready yet for mainstream meeting use, we decided to test a scenario to see how people might react.

We had 400 people on Amazon Mechanical Turk participate in a hypothetical scenario in which their work team was hosting a meeting via either Zoom or the Metaverse (randomly assigned). We asked these participants how much they were looking forward to the meeting.

Participants were instructed as follows:

"Imagine your work team is scheduling an online meeting with you and 3-4 other co-workers. The meeting will be held via [Zoom (video conference) using your laptop / the Metaverse (virtual reality) using a VR headset and haptic gloves]."

Participants were then shown one of the two images below, corresponding to whether their hypothetical meeting would be via Zoom or the Metaverse. 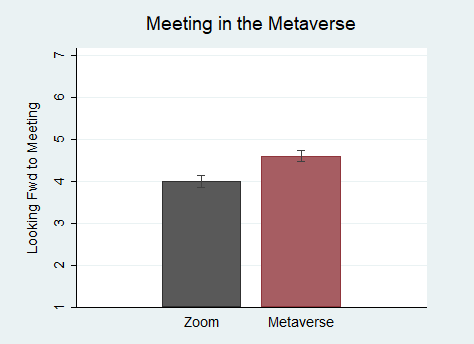 As thrilling as work meetings can be, it looks like people are more excited about having them via the metaverse than Zoom. At least, according to our online sample of participants. The results might differ for non-internet users. But given how many people now regularly use the internet, along with the growing number who use video conferencing, it’s safe to say that there is at least some genuine anticipation about meeting in the Metaverse.
​
Methods Note