Part of the culture of social media is the sharing of memes. These satirical posts of text, photos, or video often depict something in pop culture or the news in a sarcastic or cleverly humorous way. It is, in my opinion, one of the better uses of social media.

But as memes proliferated, companies (and meme accounts themselves) realized there was profit potential through advertising. And thus, for better or worse, the sponsored post was born.

Scroll through a social media platform like Instagram and you’ll quickly notice that sponsored posts get far fewer likes and engagement, on average, than regular posts. Perhaps, there’s something about mega-corporations injecting themselves into cynical humor that was originally meant to satirize the very system from which those corporations benefit? Or maybe the posts just aren’t that funny (lol).

To test the latter claim, we designed an experiment to see if a sponsored post really can be as funny as a regular post.

We conducted a randomized controlled trial with 400 people on Amazon Mechanical Turk in which participants were instructed to “Please read the Instagram post below (it’s a [sponsored] meme):” with the word “sponsored” randomly assigned. Below these instructions was a meme from Instagram, pictured below (thanks @thedad).

The meme, a clever word play involving glasses and the phrase “and then we’ll see,” included a caption below it that we manipulated to be either a neutral caption or a caption for a “sponsored post” (ad). The neutral caption simply referenced another (fictitious) meme account @WarmaParka. The sponsored caption referenced @WarbyParker, an eyewear company.
​Participants were then asked, "How funny is this [sponsored] post?" and responded by answering on a 1-7 scale (1 = Not at all, 7 = Very funny) 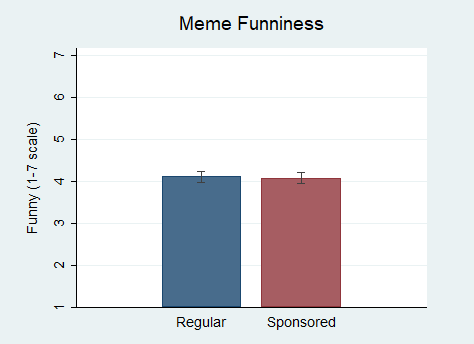 ​There are a number of possible explanations for why this could be the case. First, it could just be that the meme wasn’t funny enough. So we went back to check. According to @thedad’s Instagram page, the meme received 25,232 likes as of November 23, 2021. The average likes for the 20 non-sponsored memes posted before and the 20 after received an average of 22,943 likes. So not that different.

Another explanation is that participants simply read the meme's main text without looking at the caption below it. If so, they might have missed the sponsorship. Or perhaps participants view a "shout-out" to another meme page as a form of advertising and dislike it equally as company-sponsored ads.

Finally, as we alluded to in the intro, it could be that viewers still find sponsored posts funny, but just refuse to like them or engage with them out of spite toward corporate ads. Whatever the reason, neither memes nor ads are going away anytime soon, so there’s plenty of time for a follow-up study.
​
Methods Note