Phone calls are a common form of communication despite the rise of text messaging, email, and other less personal forms of digital communication. But some people just really seem to hate phone calls, particularly calls from unknown numbers. Some even claim that such calls trigger their anxiety.

Research has yet to investigate whether such phone calls really do trigger anxiety for those on the other end of the line. We also don't know whether certain groups of people are more or less affected (e.g., Millennials). So we tested this interesting and important question.

We had 450 people participate in a writing activity involving a scenario about their phones. The activity was designed as a randomized controlled trial.

To test if certain groups of people are more affected by phone anxiety, participants answered a few survey questions measuring their age, income, perceived time constraint, and the extent to which they were introverted vs. extroverted.
Results

In summary, calls from unknown numbers cause anxiety (Figure 1), and this is particularly true for Millennials (Figure 2). In fact, even calls from known numbers significantly increase Millennials’ anxiety. No interactions were found for introverts, time-constrained, or low-income individuals. More details are provided in the following paragraphs, charts, and tables. 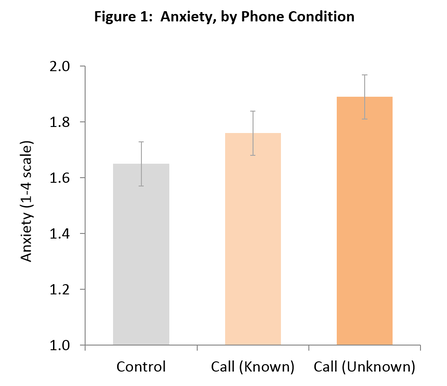 On average, calls from known numbers only increased anxiety by about 7% relative to the control condition (1.76 vs. 1.65). Statistically, this is not significant (p = 0.135). However, Millennial’s experienced significantly higher anxiety in the known call condition (1.81) relative to the control condition (1.57), a 15% increase (p=0.013; d = 0.40, an almost-medium effect size). Interestingly, this difference appears to be due in part to phone calls increasing anxiety, but also to the phone itself with no call (the control condition) slightly reducing anxiety. No other specific groups experienced such differences in anxiety, including introverts, low-income, and time-constrained individuals.

Finally, there were a few variables significantly correlated with anxiety, though we can’t say for sure that such variables “causally” increase or decrease anxiety. Income, age, and extroversion were negatively related to anxiety. Being an introvert, low-income, and being time constrained were positively related to anxiety. Interestingly, there was no relationship between Millennials and anxiety.

Our experiment suggests that phone anxiety may actually be real, particularly for younger generations and calls from unknown numbers. So if you're thinking about calling a Millennial, Gen Z, or new call recipient, consider giving them a heads up. Or just send them a text or email.

To test for significant differences in Anxiety between each condition, two-sample t-tests were used. For significant differences, the T-statistic would be large and its corresponding “p-value” would be small. If the p-value is less than 0.05, we consider the difference statistically significant. We then measure the size of those differences using a statistic called “Cohen’s d” which is a standardized effect size that makes the differences more comparable across groups (d = 0.20 is small, 0.50 is medium, and 0.80+ is large). To test whether differences for specific groups (e.g., Millennials) differ significantly from their counterparts (e.g., older generations) we used OLS regression analysis with interaction terms.

For more details about this study, including the pre-registration, survey materials, and data, check out our page on the Open Science Framework.