Do red and blue alter our feelings of energy or anxiety?
​Overview

Decades of research suggest that color can affect our brains and behaviors (Elliot & Maier, 2014). But this simple conclusion is not without nuance or debate, and the colors red vs. blue are prime examples. Conventional wisdom suggests red is a more energy-invoking color, whereas blue induces feelings of calm. Indeed, marketing research suggests that using the color red in a logo can significantly increase feelings of excitement, whereas blue tends to invoke less intense feelings like sincerity and competence (Labrecque, 2012).

To add some color to this debate, we tested whether altering the accent of an artistic image using Microsoft Office's Word application would show these popularly accepted effects of red vs. blue. Specifically, does recoloring an image with a red accent or blue accent actually make viewers feel more energized or calm?

We had 400 people from Amazon MTurk participate in a survey experiment involving a picture randomly accented either red or blue. Participants were asked to look at the image for 5-10 seconds, then answer a few survey questions measuring their anxiety and how energized they felt on a 1-7 scale. Juxtaposing red vs. blue directly instead of having a neutral-colored third image provided a conservative test of both outcomes since both are theorized to have opposite effects on both feelings of energy and anxiety (i.e., red should increase energy and anxiety; blue should invoke calm, reducing energy and anxiety).

The images participants viewed are below.
After viewing the image, participants were asked "How do you feel right now?" followed by seven words on which participants rated on a 1-7 scale the extent to which that word described how they felt (1 = Not at all; 7 = Very much). Six of the words were from the State-Trait Anxiety Inventory (averaged together to measure anxiety), including "tense," "worried," "upset," "content" (reverse-coded), "relaxed" (reverse-coded), and "calm" (reverse coded). The seventh word, "energized," measured how energetic participants felt.

We found no significant difference between red and blue accenting on feeling energized (p = 0.672), and only a marginally significant difference on feeling anxious (p = 0.097), though this difference of 0.21 was the opposite of what we'd expect, with participants viewing the blue accented image feeling slightly more anxious than participants viewing the red accented image. There were no interactive effects with gender nor age. 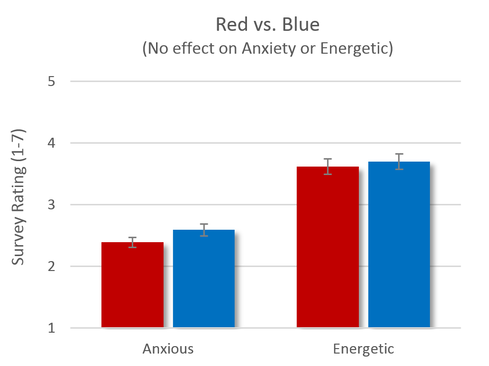 Our experiment using just red and blue accenting in Microsoft Word on a fairly basic artistic image revealed no significant differences in how anxious or energized viewers felt. However, other color-related details like hue or brightness may generate different effects. To reiterate Elliot and Maier (2014), more research is needed on the vast variety of nuance in color psychology.
​
References

We used ordinary least squares (OLS) regression analyses to test for significant differences in anxiety and feeling energetic between the red and blue accent conditions. For significant differences, the difference between the two groups' averages would be large and its corresponding “p-value” would be small. If the p-value is less than 0.05, we consider the difference statistically significant, meaning we'd likely find a similar effect if we ran the study again with this population. To test whether differences for specific groups differ significantly from their counterparts (e.g., men vs. women) we used OLS regression analyses with interaction terms.

The survey materials and data for this experiment are available on our page on the Open Science Framework.