Are red roses really more romantic than other flowers?
​Overview

What’s more romantic than a bouquet of a dozen red roses? It’s hard to imagine a love scene or Valentine’s Day ad without them. Scores of musicians have written ballads around them, the Queen of Hearts was obsessed with them, and couples spend countless dollars purchasing them from their local florists.

But the idealization of the rose as the go-to romantic flower hits the hard wall of reality when considering its high cost, short lifespan, and those pesky thorns. It begs the question, do we really view roses as more romantic than other flowers? And do women perceive them differently than men?

To test whether roses are perceived as more romantic than other flowers, we conducted an experiment with 400 people on Amazon Mechanical Turk in which participants were shown a photo of either a bouquet of a dozen red roses or a bouquet of mixed flowers (randomly assigned).

Participants were instructed to “Imagine that your significant other, spouse, or other person whom you’d like to be in a relationship with gives you the flowers below.” Participants then viewed their randomly assigned flower picture before answering the following survey question: “How romantic do you think this is?” (1-7 scale; 1 = Not at all, 7 = Extremely). 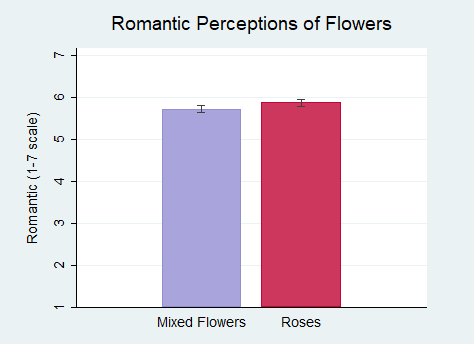 So, if you’re considering getting your special someone flowers, it needn’t be roses or bust. Be adventurous! Unless your partner has allergies. Then maybe stick with chocolates.
​
Methods Note