Respect for Employees vs. the Self-Employed
​Overview

Maybe you’ve heard of the “Gig Economy,” the growing trend of working short-term “gigs” as an independent contractor rather than a full-time job with one organization. Both have their pros and cons, and sometimes one of the two is not an option. On the one hand, full-time employment usually provides consistent pay and longer-term job security. On the other hand, self-employment is often less consistent and more uncertain, but may offer the freedom to work when and where you want. It also “cuts out the middle man,” enabling you to claim some of the profits that a company would normally take—that is, if you earn a profit.

We had 400 people on Amazon Mechanical Turk read a description of a hypothetical person, with one of the facts about him that he was either an employee for a company or self-employed (randomly assigned). We then asked participants how much they respected him.

Participants were told the following:
Below are a few facts about a person you haven’t met yet. 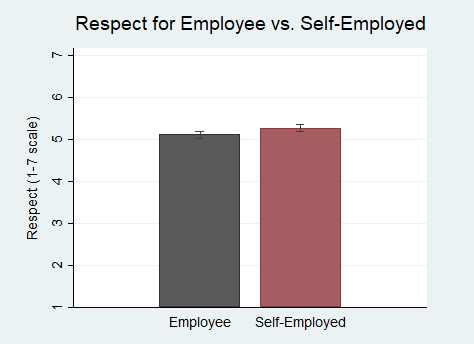 In terms of respectability, it looks like both employees and self-employed workers share roughly equivalent levels of respect. Future research could put an interesting twist on this experiment—labelling someone as a “business owner” or “gig worker.” The results could prove interesting given Americans’ admiration for the entrepreneur and the recent growth in the gig economy.