Research on the negative health effects of smoking has been the primary weapon in the arsenal of opponents against the tobacco industry. But despite the well-known health consequences of smoking, millions of people decide to light up each day. The habit is one of addiction for many established smokers. But for new smokers, the psychology of wanting to look cool may in part be fueling its uptake.

Does smoking actually make you look cool? Surveys have been done on the subject, but more rigorous randomized controlled trials have been lacking. Seiter and colleagues (2010) used such an experiment, however, with non-smoking college students. By randomizing identical photographs of models either smoking a cigarette or not, they found that non-smoking college students viewed smokers less favorably than nonsmokers in terms of attractiveness, likability, credibility, and other traits.

But would such findings generalize to the wider population? We ran a similar experiment to find out.

Using a similar experimental design as Seiter and colleagues, we tested whether smoking makes one look cool. But how do we define such a subjective concept? Wikipedia defines "cool" as an aesthetic of attitude, behavior, and style. So we asked our participants to rate our model along these three factors.

To conduct the experiment, we recruited 400 people from Amazon Mechanical Turk. Participants were shown one of two photos (randomly assigned) of a young man either smoking or not smoking while posing nonchalantly (photos obtained from Unsplash). These two photos were chosen for their similarity, to control for as many other possible confounding factors as possible.

Participants were told to “Imagine you’re walking down the street and see the person below,” before being shown one of the following photos.
Participants were then asked “To what extent do you admire this person’s…” “Behavior,” “Attitude,” and “Style” (asked separately), then rated each word on a 1-7 scale (1 = Not at all, 7 = Extremely). 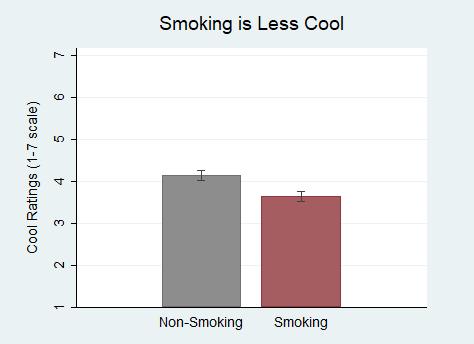 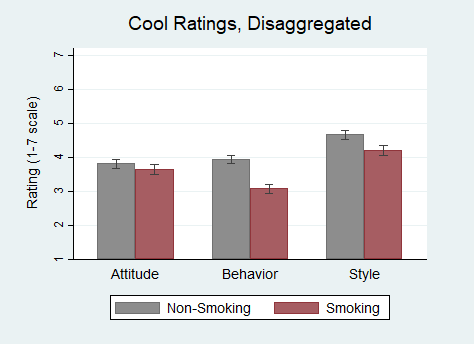 Finally, we wanted to test whether this negative smoking effect is driven only by non-smokers. After all, smokers may have picked up the habit at least in part because they thought it looked cool. So we tested whether the results differed between non-smokers and participants who smoke cigarettes or e-cigarettes (vaping).

Although we did not find a statistically significant interaction (p = 0.130), the results do suggest that smokers went easier on our model. Non-smokers rated him as 0.73 points less cool when smoking, whereas smokers only rated him 0.20 points lower when smoking. Importantly, we'd want to replicate this effect before putting too much confidence in it given the high p-value above 0.10. 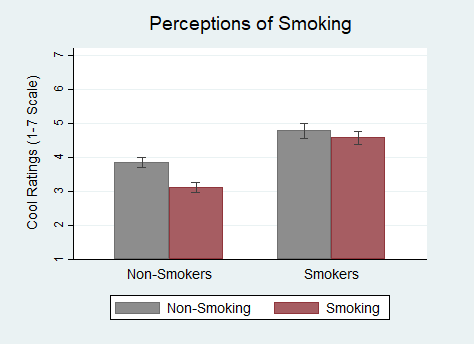 In summary, if you’re considering taking up smoking for the cool factor, you might want to think again. Despite all of the imagery from Hollywood and marketing from the tobacco industry, everyday people do not view smoking as cool. And if that’s not enough reason to not smoke, there’s also the fact that it might kill you.
​
Methods Note