Some research suggests that social media may actually harm mental well-being (Kross, et al, 2013). However, much of the research in this area has been correlational, rather than causal. It could be that people who are experiencing poor mental health are increasingly seeking social media as an escape from an unpleasant reality. It could also be that only certain types of social media harm mental health, whereas others help it.

We conducted an experiment with 800 people to examine the short-term effects of three types of social media posts on the different parts of people’s “subjective well-being” (SWB), which includes life satisfaction, positive affect (i.e., good mood), and negative affect (i.e., distressed mood), which we measured on a 1-5 scale. Research has established SWB as a reasonably representative variable for more objective outcomes (Oswald & Wu, 2010).

Each participant viewed 10 Instagram posts within 1 of 4 randomly assigned categories: (1) Memes, i.e., satirical posts about current topics in pop-culture, (2) Animals, i.e., cute dogs and cats, (3) Luxury, and (4) Basic colors, the control condition. Examples of these conditions are below. All images can be found in our materials attachment.
We predicted that social media posts about luxury goods would decrease SWB and its three components, likely through upward social comparisons, but posts about cute animals and memes would increase SWB and its three components. We also collected gender and age variables to test whether social media posts affected those groups differently.

Results
​
Overall, our experiment with 800 people on Amazon MTurk (approx. 200 in each condition) revealed that social media posts don't seem to affect people's SWB that much, at least in the short-term. There were no significant effects of Instagram posts about luxury goods, cute animals, nor memes on overall subjective well-being (Figure 1). But this isn't too surprising given that one of the sub-components of SWB, life satisfaction, is a more enduring variable not easily affected by a brief string of Instagram posts. The effects on mood could be more interesting given it's susceptibility to more short-term stimuli. 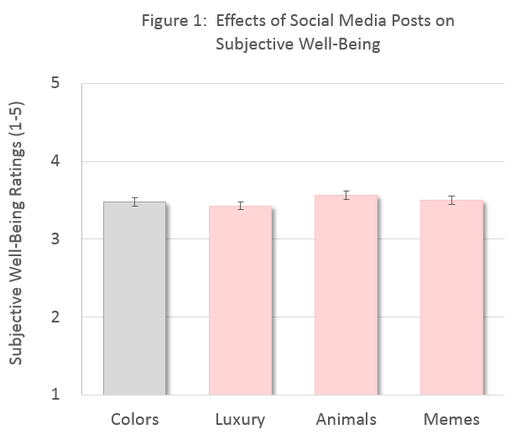 The findings about memes' were interesting, and merit a follow-up study. A simple analysis shows no effect of memes on mood. But this includes people who simply "skimmed" or skipped most of the memes. We thought this might happen, and so we added a hidden timer on the meme page to measure how long our participants spent viewing the memes. When we look only at people who took at least 5 seconds to read each meme, we find a significant positive effect of about 7% on overall mood. However, for those who spent the least amount of time viewing the memes (bottom 10% or 25%), we find a significant negative effect, more than double the positive effect. What we don't know is whether memes caused these different effects, or simply people in good moods chose to spend more time viewing memes and/or people in bad moods chose not to.

Life satisfaction was not affected by any of our three types of social media posts. We also didn’t find any significant differences between genders or age categories. But a longer-term experiment could have different results.

Two-sample t-tests were used to test for significant differences between the control condition and each social media condition for each of the following outcomes: (a) SWB, the average of life satisfaction and net affect, (b) life satisfaction, (c) net affect (i.e., positive and negative affect combined), (d) positive affect, and (e) negative affect. For all statistical tests, p < .05 was considered significant. Each variable was measured as follows:
​​
​Summary statistics for this study are available below. For more details about this study, including the pre-registration, survey materials, and data, check out our page on the Open Science Framework.