An Experiment on Who, What, and How to Sell
​Overview

New ventures typically need customers and financial resources to grow and create value for society. But obtaining those resources and reaching customers is far from intuitive. Decisions made at the very beginning of a startup's life can greatly affect its chances of success.

Decisions such as whether to organize as a for-profit or a non-profit, sell first to friends or acquaintances, and provide edgy or mainstream products may fundamentally affect the organization's ability to attract customers and startup money. As startup founders ourselves, we decided to test these hypotheses with a market research experiment.

We hypothesized that the following would yield more subscribers and revenue:
* Organizing as a non-profit (vs. for-profit)
* selling to friends (vs. acquaintances)
* selling edgy products (vs. mainstream)

(1) Nonprofit vs. For-Profit: The organization sending the newsletter is either a nonprofit or a company.
(2) Friend vs. Acquaintance: The newsletter is being started by either a friend or a new acquaintance.
(3) Mainstream vs. Edgy: The research is either mainstream or “edgy” (i.e., new and unusual).

Survey takers read the scenario below (opposing conditions in brackets), then answered two survey questions about their willingness to subscribe to the newsletter and pay money to support it:
“A [friend of yours / contact you just met] is starting a [nonprofit / company] that conducts research and shares the results via a monthly newsletter. [The research includes topics such as health, social media, psychology, and other topics of general interest (for example, an experiment that tests if social media affects mental health) / The research focuses on edgy topics, for example, do phone calls from unknown numbers cause anxiety, and does being rated affect mental health].

[Your friend / This person] has emailed you and several others asking if you would subscribe to the [nonprofit’s / company’s] monthly research newsletter.”

*Would you subscribe to [this / your friend’s] [nonprofit / company’s] research newsletter?
[No / Yes]

*Would you [donate / pay to subscribe] to [this / your friend’s] research [nonprofit / company]? If so, how much?
[No / Yes (specify $ amount)]
Results
​
If you’re planning to start a research venture, the results suggest doing so as a nonprofit, sell to friends first, and maybe focus on mainstream trends (Figures 1-2). The combination of a nonprofit and soliciting friends is particularly powerful (Figure 3). Even when excluding a generous outlier, the average proposed donation for a friend’s research nonprofit was $9.42 per person, relative to $0.23 for an acquaintance’s company (p < 0.001). More details are provided in the following paragraphs, charts, and tables. 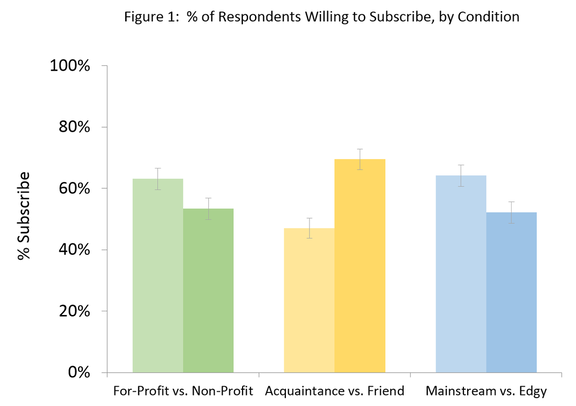 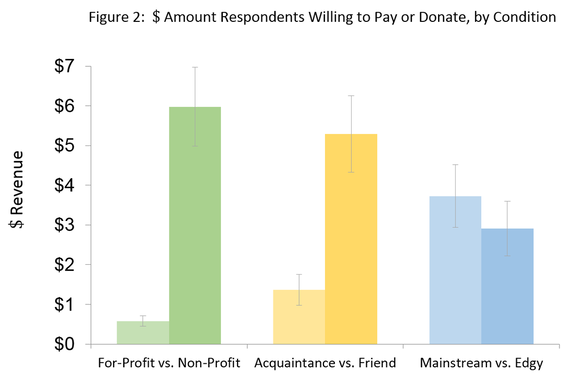 Interestingly, people were much more likely to subscribe to the research newsletter when the organization was a for-profit company (63.1%) instead of a nonprofit (53.4%) (p = 0.049; V = 0.10, a small standardized effect size); however, people were much more likely to contribute financially when the organization was a nonprofit ($10.85 per person, on average) instead of a company ($0.58 per person, on average) (p = 0.043; d = 0.20, a small std. effect size). The revenue result actually becomes more precise and statistically significant when we exclude one outlier in the data—an individual in the nonprofit-friend-mainstream condition willingness to donate $1,000. The average excluding this data point is $5.98 for nonprofit, $0.58 for company (p < 0.001; d = 0.53, a medium std. effect size).

So, what's the best combination? Forming a nonprofit and soliciting friends is particularly powerful, per Figure 3 below. The average intended donation for a friend’s research nonprofit was $9.42 per person, relative to $0.23 for an acquaintance’s company (p < 0.001). Although not every organization has the ability or willingness to be not-for-profit, those that do may want to seriously consider this impactful form of organizing. And although most organizations eventually need to expand beyond their circle of friends, those with an abundance of friends have a great place to start. 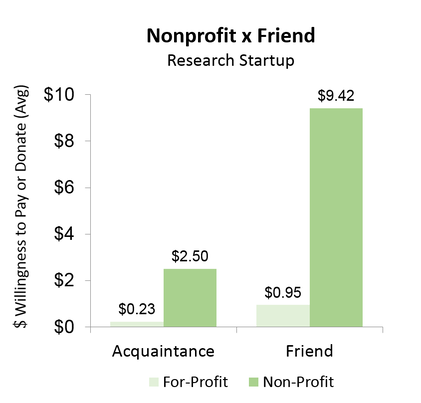 To test for significant differences in subscriber rates between each conditions, we used a statistical test called a Chi-squared test. This test is commonly used to measure differences between two categorical variables, such as nonprofit vs. company and subscribe vs. don’t. For significant differences, the Chi-square statistic would be large and its corresponding “p-value” would be small. If the p-value is less than 0.05, we consider the difference statistically significant. We then measure the size of those differences using a statistic called “Cramer’s V,” which is a standardized effect size that makes the differences more comparable across groups (e.g., comparing a difference of 1% vs. 10% to 51% vs. 60%). An effect size of 0.10 is small, 0.3 is medium, and 0.5 or more is large.

To test for significant differences in revenue, two-sample t-tests were used with p < .05 indicating significance. Standardized effect sizes were measured via “Cohen’s d” where d = 0.20 is small, 0.50 is medium, and 0.80+ is large. Including or excluding participants who viewed the scenario for at least 10 seconds did not significantly change the results.
​
​For more details about this study, including the pre-registration, survey materials, and data, check out our page on the Open Science Framework.