How sending multiple texts vs. one affects your likability
​Overview

Are you a line texter or a block texter? It may seem like a trivial issue, but with text messaging now a dominant mode of communication, different styles of texting like emoji use, slang, and typos can significantly affect your recipients' reactions.

Texting in block paragraphs vs. multiple lines one right after another is a particularly interesting style difference. It isn't talked about much, but it may actually effect text recipients. For example, perhaps a line-by-line string of texts (and the buzzing notifications that accompany them) irritate some recipients, whereas others view it as better mirroring in-person conversation. Such differences may even depend on age, given the differences in how long texting and texting norms have been around for different generations.

To test these hypotheses, we conducted an experiment with 400 people on Amazon Mechanical Turk to see if the Likability of a texter is affected by Text Block vs. Text Lines, and whether those perceptions differ between younger and older respondents. Participants were told to "Imagine you get the following text from a co-worker who has been away for a few months." Participants were then shown one of the images below (randomly assigned) and asked, "To what extent do you like this person?" (1 = Not at all, 7 = Extremely).
​Results

We found a significant difference of -0.77 (-14.1%) between the Block Paragraph text condition (avg. = 5.49) and the Multiple Lines text condition (avg. = 4.72), (p < 0.001), indicating that texters who send multiple texts back-to-back may actually be hurting their perceived likability. The results were even more interesting when we considered differences by age group. 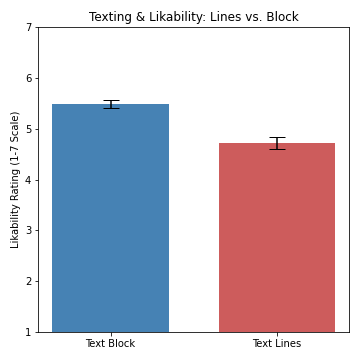 The preference for a single block paragraph of text was particularly pronounced for younger participants. We found a significant interaction between text style and age (p = 0.002), such that we'd expect a 60 year old Baby Boomer would like both texters equally, whereas a 20 year old Gen Z would like the multi-line texter 1.45 points (25%) less on a 1-7 scale. 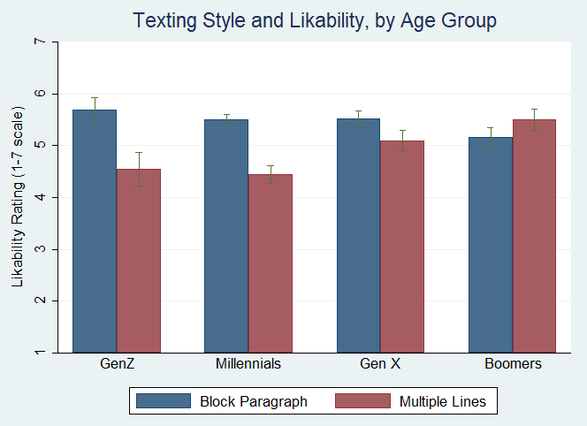 So if you send a lot of back-to-back multi-line texts to people, particularly Gen Z or Millennials, you may want to consider consolidating the information you send into one or two texts at a time.
Methods Note:

We used ordinary least squares (OLS) regression analysis to test for significant differences in the likability of our hypothetical texter between the block paragraph text and multiple line text conditions, For significant differences, the coefficient would be large and its corresponding “p-value” would be small. If the p-value is less than 0.05, we consider the difference statistically significant. To test whether these differences differ across specific age groups we used OLS regression analyses with interaction terms for condition and age as a continuous variable, then graphically represented the effects by generational age group (e.g., Gen Z ages 18-26, Millennials 27-40, Gen X 41-56, Baby Boomers 57 or over).