Over half of the world’s population uses social media. But the concept of “social media” is quite fragmented. Different platforms have arisen catering to different demographics with preferences for different mediums. For example, a platform like Twitter specializes in written posts and caters to a broad swath of age groups, particularly Millennials, whereas a platform like TikTok specializes in short videos and caters more to Gen Z.

With such glaring differences between platforms, it makes us wonder what people think about certain platforms and their users. For example, older critics may question TikTok users’ interest in funny videos and raise eyebrows at its ownership by a Chinese firm. However, younger users may question Twitter users’ desire to post one’s thoughts and life details on a very public platform. Interestingly, despite some of the negative press against TikTok, the platform boasts over 1 billion monthly active users compared to Twitter's 330 million.

So as a fun experiment, we tested what people think of users of TikTok vs. Twitter.

We conducted an experiment with 400 people on Amazon Mechanical Turk in which participants read a hypothetical scenario about a social media user whose favorite platform is either Twitter or TikTok (randomly assigned). Participants then rated how much they like the person.

Participants were instructed to “Imagine that you and a new acquaintance are talking about social media, and they mention that their favorite social media platform is [Twitter / TikTok].”

The results are in, and it looks like social media platform use does affect user likability. Likability ratings were higher for our hypothetical Twitter user (avg. = 4.47) than our TikTok user (avg. = 4.07), (p = 0.008). However, this was a small difference by statistical standards. The difference was only a quarter of a standard deviation. And notably, neither user’s average rating was below average, though our TikTok user rode that line a bit more closely. 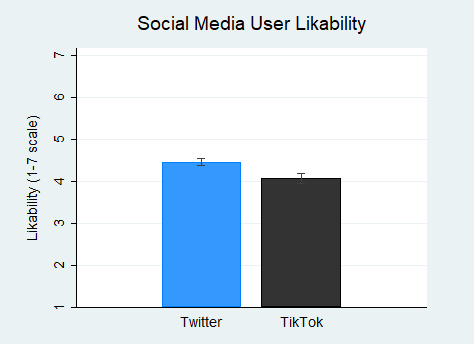 In this case, it does look like everyday people hold a slight bias against users of TikTok despite its size and growing popularity. Perhaps this is the result of negative PR against the TikTok platform and U.S. tensions with its parent company, ByteDance. It’d be interesting to see what these results would look like again in 5 years, assuming both platforms are still around.