Does a new car affect how much people like you?
​Overview

If you drive, you’ve probably thought about buying a new car. But why? It’s probably not for economic reasons. High price tags and rapid depreciation make such a purchase financially unappealing to many. And most cars don’t come out with ground-breaking new features regularly.

For many, buying a new car is thought to be a booster of social status. But do people really view the driver any differently? In a previous experiment about luxury sports cars, we tested whether a vignette and image of a Lamborghini vs. a Honda Civic elicited higher ratings of likability toward the driver. It did not.

Our hypothesis is that a driver of a new car would be rated no differently than a driver of a used car of the same make and model.

We recruited 400 people from Amazon Mechanical Turk to read a hypothetical scenario about a driver of a used car or a new car of the same make and model (randomly assigned), view an image of the car, then rate how much they’d like the person.

Participants were told to “Imagine you’re parking your car at the grocery store. Another driver pulls into the space across from you driving a [2005 / 2021] Ford Taurus (pictured below). He gets out of his car, nods to you as an informal greeting, then walks into the store.” Participants were then shown one of the two corresponding images below. 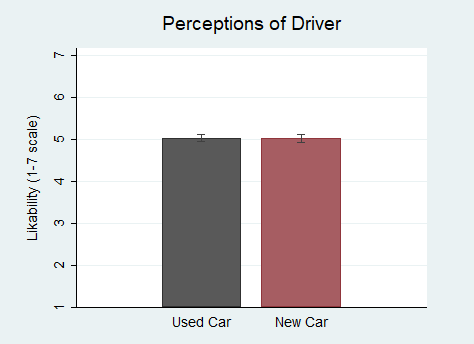 If you’re worried that others might look down on you for owning a used car, fear not. You may very well be perceived as just as likable as the person who spent tens of thousands of dollars extra on their new car.
​
Methods Note