Does a meal become less appetizing when it's labeled “vegetarian”?
​Vegetarian food provides a number of benefits to both the eater and society. It is often cheaper, healthier, and better for the environment relative to red meat, which is higher in saturated fats, requires more resources to process, and increases carbon emissions.

There’s just one problem. Americans love meat. According to a 2018 Gallup poll, only 5% of Americans are vegetarian, and the numbers are far lower for older white Americans on the political right (Gallup 2018). For meat-lovers, the decades it took for vegetarian foods to become appetizing and the cultural significance of meat-based meals likely made it harder to support, let alone eat, vegetarian diets.

But vegetarian foods have come a long way. Many are lauded as even more appetizing than meat. But the stigma may persist. Could a solution be to simply ditch the “vegetarian” label and let the food speak for itself? In essence, is the problem with vegetarian food now simply a problem with the word “vegetarian?”

We ran an experiment with 400 people on Amazon Mechanical Turk to test whether framing a food as “vegetarian” made it less desirable. Participants viewed an image and description of a tofu dish, with the dish labeled as either “Sesame Stir Fry” or “Vegetarian Stir Fry” (randomly assigned). Nothing else was changed. The ingredients and food image were kept identical across both groups.
The dish below is called [SESAME STIR FRY / VEGETARIAN STIR FRY].

How likely would you be to eat this [Sesame Stir Fry / Vegetarian Stir Fry]?
(1 = Not at all, 7 = Extremely).
Results


It’s possible that the image alone was enough to tip viewers off that it was in fact a vegetarian dish. However, the overall ratings for both dishes were fairly high, above 5 out of 7, so this may not have been as much of an issue. 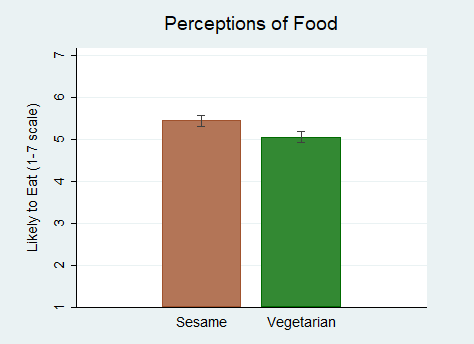 Although attaching the “Vegetarian” label to the food did make it less desirable, this effect was fairly small. Restaurants may want to hold off on changing their menu labels for this reason alone. But if you’re thinking of what to name your new dish, you may want to think twice about the vegetarian label, at least at this point in time.
Methods Note: