The debate about climate change is heating up as more and more people, particularly public figures, are making their beliefs about climate change known. Historically, it's been a very polarized issue, with liberal Democrats defending the claim of a warming climate from human causes. But with wilder weather and a shifting political climate, are conservatives finally warming up to the idea of climate change? And how do moderate independents perceive the issue.

We conducted an experiment with 400 people on Amazon Mechanical Turk to test the Perceived Intelligence of a hypothetical public figure as either a Climate Change Believer or a Climate Change Denier (randomly assigned), and whether those perceptions differ between Democrat and Republican respondents. Participants were told "A local public figure in the U.S. has recently asserted that climate change from human causes is [not] real," and were then asked, "How smart do you think this person is?" (1 = Not at all, 7 = Extremely).
​
​Results

However, as expected, this effect was heavily influenced by political beliefs. The difference in perceived intelligence between the Climate Change Believer and Climate Change Denier conditions for Republican respondents (Diff = 0.39) was significantly lower than Independents (Diff = 1.87) and far lower than Democrats (Diff = 3.06). Approximately 25% of our respondents were Republican, 25% were Independent, and 50% were Democrat. 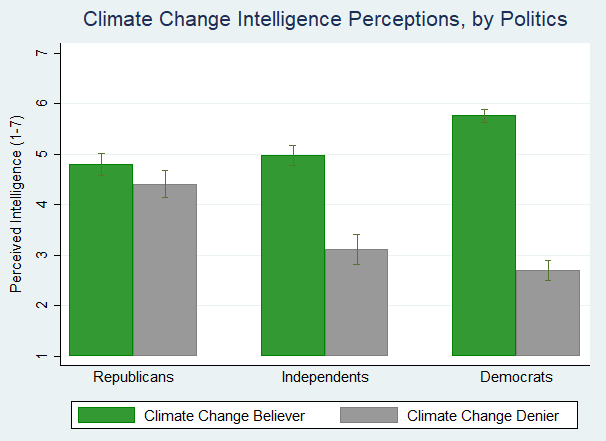 The results reveal that political beliefs still influence perceptions of climate change and those who believe it or deny it. Indeed, we found a similar effect for eco-friendly products. Nevertheless, the significance of the effect for Independents and the fact that deniers are not perceived as smarter than believers from Republicans' perspectives suggests that, much like our climate, political sentiment is changing.
​