When it comes to smartphones, iPhone and Android users seem to live in different bubbles. Well, at least different-colored bubbles. When iPhone users send texts to fellow iPhone users, Apple’s flagship blue text message bubbles appear. But when sending to any other smartphone (e.g., Android devices), those bubbles appear green.

This color difference has become satirized in pop culture, with memes of iPhone users looking down on Android users when they see the green-bubbled texts. But does such an effect really exist? Do those green bubbles really cause iPhone users to turn up their nose and like the recipient less?

Normally, such questions would be the target of the National Enquirer, not the New England Journal of Medicine. But today, we’re firing up the scientific furnace for some tabloid fodder psychology. Let’s get to it.

Participants were instructed to “Imagine that yesterday you met a new acquaintance, Michael, while out with a group of co-workers. He just texted you the following from his [iPhone / Android phone].” Participants were shown one of the two images below, randomly assigned.
​
Participants were then asked “How much do you like this person? (1 = Not at all, 7 = Extremely)” using a 1-7 scale. 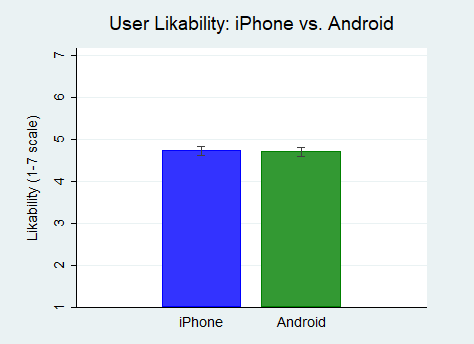 This time, it looks like pop culture was wrong. So, if you’re an Android user, and you ever get self-conscious about sending a text to an Apple aficionado, you can rest assured it really doesn’t matter.

But that's not to say that using certain types of tech can't elicit other perceptions. For our next experiment, we'll test whether using a Mac vs. PC can make the user seem more sophisticated.
​
Methods Note