Over 25% of goods in the world are manufactured by China (Statista 2021; United Nations 2019). This may come as no surprise given the substantially lower costs of producing goods in China. But concerns about product quality and livable wages have led some to voice disapproval, advocating for more goods made in the U.S.

But is this a concern of a small group of consumers, or a broader movement across America? Would American consumers actually consider not buying a product if they knew it was made in China?

We found a small but significant difference in purchase likelihood (p = 0.014). Participants were less likely to purchase the tupperware set when it was made in China (avg. = 4.48) than when it was made in the USA (avg. = 4.91). This difference was small, however, about a quarter of a standard deviation. Other factors may have influenced participants’ likely purchase ratings. For example, politics or age may affect people’s tendency to care or not care about a product’s country of origin.
​ 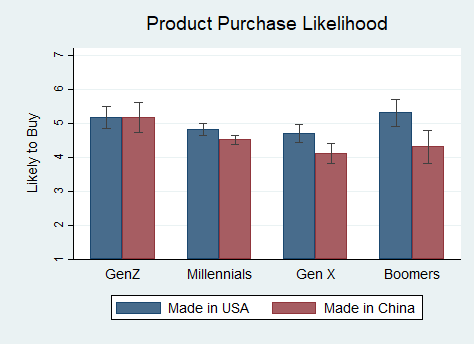 Overall, the results suggest that there might be a small bias against products made in China, and that bias may be more pronounced in older buyers. But it’s also possible that older buyers are just more patriotic—they may not be biased against China, but rather they may prefer products made in the USA. So we designed a second experiment to test this very hypothesis. Here are the results.
​
Methods Note