In a ﻿previous experiment﻿, we found that people are less likely to want to buy a product made in China vs. the United States, particularly for older generations.

But is this evidence of bias against products from China, or a bias toward products made here in the U.S.?

We designed a similar experiment to test whether Americans have a bias for products made here in the U.S.

We recruited 400 people from Amazon Mechanical Turk to view a hypothetical scenario about purchasing a set of pots and pans that were either made in Canada or made in the USA (randomly assigned). We chose Canada for it's similarities to the U.S. and strong trade relationship (Canada is the U.S.'s 3rd largest import supplier). Both images of the pots and pans set were identical except for the caption in the upper-right corner “Made in Canada” or “Made in USA.”

Participants were instructed as follows: “Below is a set of pots and pans that costs $100. They are made in [Canada / the United States].” Participants were then shown one of the two images below.

We found no significant difference in participants’ desire to buy the pots and pans when they were labelled as Made in Canada (avg. = 4.65) or Made in USA (avg. = 4.73), (p = 0.655). However, the results were more interesting when we turned to differences by age.
​ 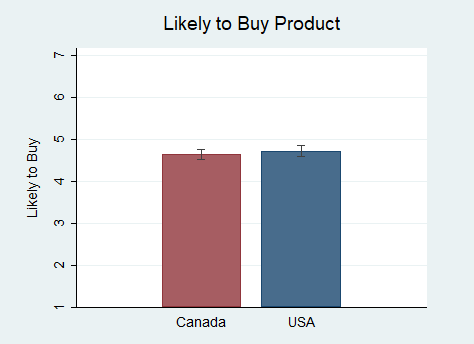 When we analyzed the results by participants’ age, we found a significant interaction between age and whether the product was made in Canada or in the USA. Similar to the interaction effect in our Made in China experiment, older participants were significantly more likely to buy the product when it was made in the USA than Canada, whereas younger participants were either indifferent or preferred the Canadian product slightly more.
​ 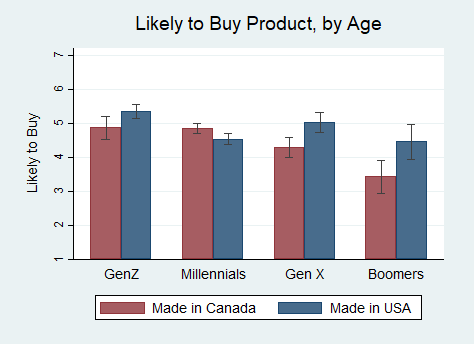 Analyzing these age results linearly, for each additional year of age we’d expect the difference in desire to buy to increase in favor of Made in USA by 0.04 points on a 1-7 scale (p = 0.025). For example, we’d expect a 60-year-old’s desire to buy rating to be 0.95 points higher for the U.S. product than the Canadian product, but for a 20-year-old that difference would be 0.56 points higher for the Canadian product than the U.S. product.

Overall, the results of both of our experiments suggest that there may not be a bias against products made in China, so much as a bias in favor of products made in the United States. It’d be interesting to test if this effect changes for different types of products like equipment or electronics, or for other countries like Germany or Japan.
​
Methods Note

We used ordinary least squares (OLS) regression analyses to test for significant differences in purchase likelihood between the USA and Canada conditions. For significant differences, the difference between the two groups' averages would be large and its corresponding “p-value” would be small. If the p-value is less than 0.05, we consider the difference statistically significant, meaning we'd likely find a similar effect if we ran the study again with this population. We used OLS regression with interaction terms to whether the results differ by age.