Does a vegan diet affect your likability?
​Overview

Vegan’s catch a lot of flak in pop culture for their restrictive dietary requirements. This is particularly the case in parts of the U.S. where meat is considered a staple in people’s diets. Indeed, in a previous experiment we found that people were less likely to want to eat food labeled “vegetarian,” even when the ingredients and visual were exactly the same as a non-vegetarian labeled dish.

But times are changing. Concerns about health and climate change make vegan diets more appealing, given their lower carbon footprints and better nutrition. But stereotypes are sticky.

So we wondered, how are vegans perceived in the eyes of their peers? And do political beliefs or dietary choices influence these perceptions?

We conducted an experiment with 400 people on Amazon Mechanical Turk in which participants were told about a hypothetical person who eats either a vegan diet or a balanced diet (randomly assigned). We then had participants rate how much they liked our person. Participants were instructed as follows.
Below are a few facts about a person you haven’t met yet.
Based only on the information above, how much do you like this person? (1 = Not at all, 7 = Extremely)
Participants then responded to the likability survey question using a 1-7 scale. At the end of the survey, participants were also asked their gender, age, political beliefs, and dietary habits (whether they were a vegan, vegetarian, or neither).

We then tested whether vegan likability differed between participants eating regular diets and people eating vegan or vegetarian diets. Although none of the analyses were statistically significant (i.e., we can’t be reasonably sure the results weren’t just due to chance sampling), we did find differences trending in the directions we’d expect.

Non-vegans did tend to dislike vegans a bit more than vegans themselves (non-vegan diff. = -0.40, vegan diff. = +0.12), but even vegetarians didn’t significantly like vegans more, and instead liked them just a bit less than our balanced diet person (diff. = -0.26). Again, none of these interactions were significant, even when vegans and vegetarians were combined (p = 0.164), but this may be due in part to the smaller sample size among vegans and vegetarians (61 vegan participants, 44 vegetarian participants).

Ironically, vegans were actually significantly more likely to like our hypothetical person regardless of which diet he chose (p < 0.001). Indeed, vegans liked both people an average of 0.86 points more than omnivores and vegetarians combined. So despite the flack they catch for their dietary restrictions, they were less judgmental of others. 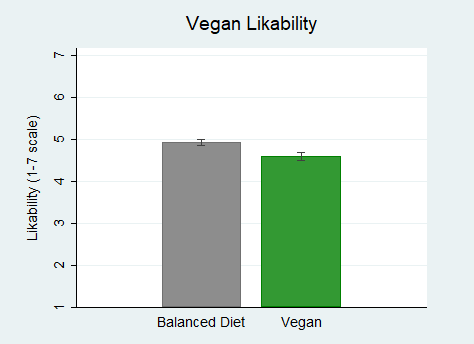 Next, we looked at whether vegan likability differed across political beliefs. We did find a marginally significant difference for Republicans. Whereas Democrats and Independents disliked our vegan insignificantly relative to balanced diet (Democrat diff. = -0.23, Independent diff. = -0.09), Republicans rated our vegan much lower (diff. = -0.75, p = 0.079). 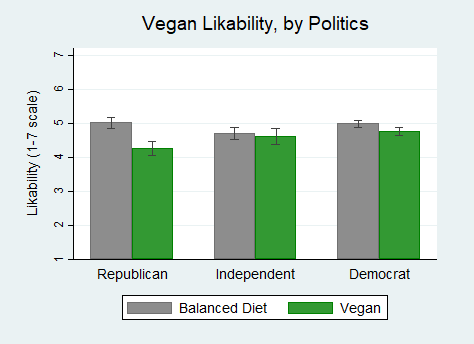 It looks like vegans still take a small hit in likability for their dietary choices. It’s not a large effect though, and seems limited to folks on the more conservative end of the political spectrum. But as the demands for more sustainable and healthier dietary options grow, it’ll be interesting to see if this effect holds 5-10 years from now.
Methods Note:

We used an independent samples t-test to test for significant differences in perceptions between our hypothetical vegan and omnivore. For significant differences, the coefficient would be large and its corresponding “p-value” would be small. If the p-value is less than 0.05, we consider the difference statistically significant. To test for interactions (a difference in the differences) between the main results and participants' age, political beliefs, or dietary habits, we used OLS regression analyses with interaction terms.