Is art perceived to be more truly "art" when it comes from Europe?
​Overview

When you think of art, what do you think of? A famous painting by da Vinci, Rembrandt, Picasso, or van Gogh? Or perhaps a famous architectural structure like the Sistine Chapel, or museums like the Louvre? One thing that all of these works of art have in common is that they are all European.

It may seem intuitive to associate art with Europe. But Europe’s dominance over the art scene has much to do with its history of concentrated geo-political power and the socially constructed nature of art itself. In other words, European nations got to set the rules for what is considered “art” because art is subjective and they had the power.

But so many other countries have produced great works of art. For example, Hokusai’s The Great Wave off Kanagawa (Japan), Frida Kalo’s self-portraits (Mexico), and Grant Wood’s American Gothic (American) are all examples of famous artworks. The question is, do we discount them because they’re not European?

To test if there’s a psychological bias in favor of European art, we designed an experiment with 400 U.S. participants on Amazon Mechanical Turk. Participants viewed a painting by Frederick Carl Frieseke, whom we labelled as either a French artist or American artist (randomly assigned). We then asked participants the extent to which they consider the painting as art and how much they like the painting.

An interesting aspect of this experiment is that F.C. Frieseke was actually French-American. He was born in the U.S., but lived in France most of his life. So he's technically both a French and American artist.

Participants were told that “[French artist Frederick Carl Frieseke / American artist Fred Carl Frieseke] painted the painting below.” Participants then viewed one of the two images below. Both were the exact same painting with the same signature (added by us), but the location was altered as either “Paris, France” or “New York, NY” in the bottom-left corner.
Participants were then asked two questions, “To what extent do you think this [French / American] painting is art? (1 = Not at all, 7 = Definitely art)” and “How much do you like this painting? (1 = Not at all, 7 = Very much)” using a 1-7 scale. At the end of the survey we asked participants if they regularly engage in art as a hobby, to test if the results differ between those who do and do not.

Our analysis yielded an interesting result. Contrary to our hypothesis, American-attributed art was actually slightly more likely to be considered “art” (avg. = 6.23) than European-attributed art (avg. = 6.01), (p = 0.044). However, this difference was quite small, only about a fifth of a standard deviation, which is somewhat smaller than most of our statistically significant differences. 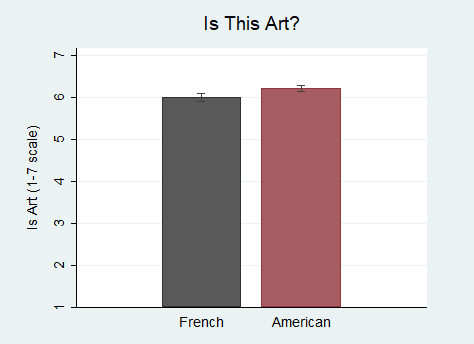 One possible explanation for this difference is that American participants simply favor things made in American. In two separate experiments, we found that older American participants were more likely to buy a product that was framed as having been made in the USA relative to Canada or China. However, the results here weren’t affected by participants’ age. Nor were they affected by engagement with art as a hobby.
​
In terms of how much participants liked the art, we found no difference at all between our French-attributed painting (avg. = 5.40) and American-attributed painting (avg. = 5.40), (p = 0.987). Nor did this result differ by gender, age, or engagement with art as a hobby.
​ 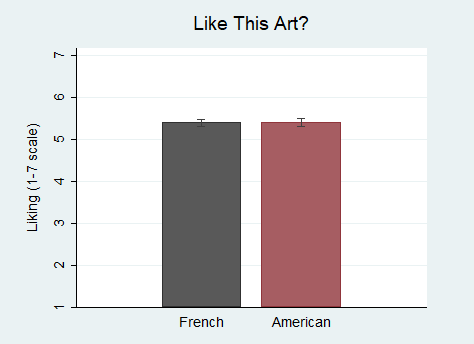 We find no support for a current psychological bias in favor of European art, at least among everyday people. It looks like the era of European art dominance may be a thing of the past. But this was one experiment, and there are many other different types of art forms out there. It would be interesting to test how perceptions of several different works of art from around the globe differ relative to European art and art from other geo-political areas.
​
Methods Note