Do people prefer roses, a $50 gift card, or both equally?
​Overview

‘Tis better to give than to receive. But what should we give? Finding the right gift for someone special can be downright difficult. In today’s age, it’s become almost commonplace to simply give a gift card. For the recipient, a gift card can be converted to practically anything within the bounds of the store or platform designated. For the giver, shipping, packaging, and searching become problems of the past.

But does a gift card really evoke the same joy as receiving something more tangible? Perhaps even the quintessential bouquet of flowers, despite its more ephemeral nature, would be a more appealing gift. But it may depend on gender. In a previous experiment we found that receiving flowers was rated as slightly more romantic by women than men, perhaps due to gender stereotypes.

Given the lack of research in this area, we decided to test whether gift cards or flowers would be more liked as a gift.

We recruited 400 people from Amazon Mechanical Turk to read a hypothetical scenario about receiving a birthday gift from a significant other, either a bouquet of roses or a $50 gift card (randomly assigned), then tell us how much they like the gift. We also included an image of the gift to enhance realism.

We chose a $50 card and a bouquet of roses for their roughly equivalent value. We also designed and randomly displayed one of two different gift cards, to test whether the visual design of the gift card affects gift likability.

Participants were instructed as follows: “Imagine that it’s your birthday and your significant other, spouse, or person whom you’d like to be in a relationship with gives you a [bouquet of a dozen roses / $50 gift card to your favorite store].” Participants were then shown one of the corresponding images below (approx. 200 participants saw roses, 100 saw the black and gold $50 gift card, and 100 saw the red and beige gift card).

Participants were then asked, “How much do you like this gift? (1 = Not at all, 7 = Very much)” using a 1-7 scale. At the end of our survey, we also asked participants their gender to test whether women like the flowers more, and men prefer the black and gold gift card. 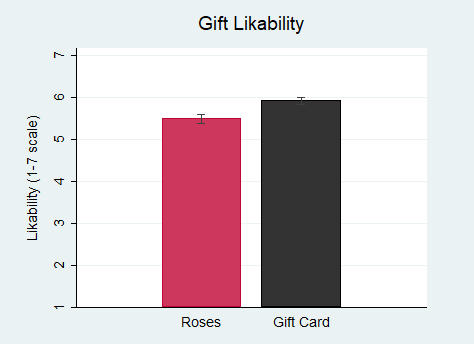 One interesting finding, albeit an exploratory one, was that the preference for the gift card was much larger for people without higher education (diff. = 1.31). For those with a bachelor’s degree or above, the effect completely went away (diff. = 0.04), (p < 0.0001). Normally we would caveat such an unplanned analysis pretty heftily, but the size of the effect suggests there could be something there.
​ 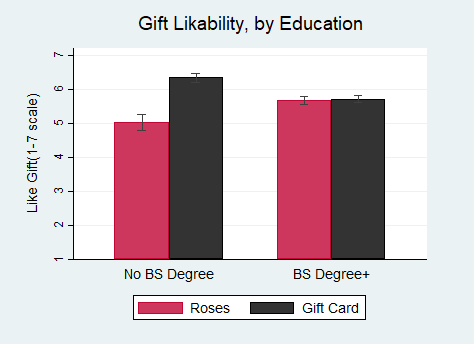 We thought that perhaps BS degree holders simply earn more, and thus the higher income might mitigate the allure of the $50 gift card value. However, the effect remained just as strong even when controlling for income. Perhaps the social norms around receiving gift cards are a bit more frowned upon, or the norms around receiving flowers are stronger, for those with higher education. Those questions will have to wait for a future study.

If you’re out shopping for someone and you don’t know what to get them, it looks like a gift card might be a safe bet. Perhaps roses are a bit too temporary, not to mention the variability in their price and quality. But for those with a university degree, it might not matter.

Of course, if you know the person well, you might already have the perfect gift in mind. And if not, a gift card could be just what they need. It’s the thought that counts anyway, right? At least now you can tell them you’ve done your research—they’d probably like the gift card more.
​
Methods Note