Does a vegetarian diet affect your likability?
​Overview

But meat is a staple in American culture. In previous experiments we ran here in the U.S., participants were less likely to want to eat food labeled “vegetarian” and rated vegans as less likable, particularly by conservative participants.

We conducted an experiment with 400 people on Amazon Mechanical Turk in which participants were told about a hypothetical man or women who either eats a vegetarian diet or a balanced diet. Both gender and diet of the hypothetical person were randomly assigned via 2x2 factorial design, allowing us to look at both effects separately and simultaneously.

Participants were told the following:
Below are a few facts about a person you haven’t met yet.
Based only on the information above, how much do you like this person? (1 = Not at all, 7 = Extremely)
Participants then responded to the likability survey question using a 1-7 scale. At the end of the survey, participants were also asked their gender, age, political beliefs, and dietary habits (whether they were a vegan, vegetarian, or neither). 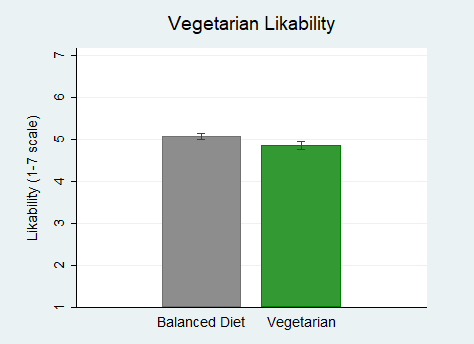 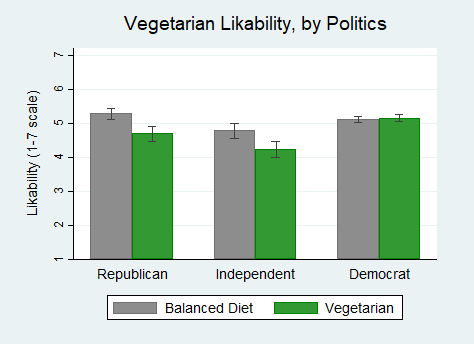 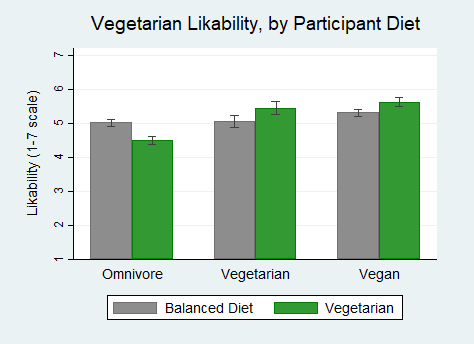 Overall, it seems like there’s still a slight social penalty for adhering to a vegetarian diet. However, this penalty is smaller than vegan’s and is muted for liberals and fellow vegetarians and vegans. Thus, although society is still learning to accept the vegetarian diet, we do seem to be making progress.
Methods Note: